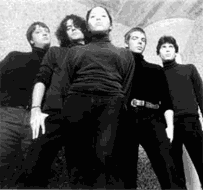 One cold night, during the very cold December of 2000, I found myself at the original Handle Bar myspace warning in downtown Pensacola. Dilapidated doesn’t even begin to describe the place, but its rundown condition gave it the perfect character to be a favored destination for the town’s surprisingly robust hipster set, until it burned down in 2001. don’t worry, the handle bar was rebuilt in a new larger building in the same location that’s actually a much better music venue.

The venue was, and continues to be, an iconoclastic home to PBR drinkers and is one of the handful of places in town where independent, unsigned and local musicians can perform their music. On this particular winter’s night, I and a friend from high school (as well as some of her friends) were in attendance of this band who were touring in support of their debut album. Their name was Japanic, a strong enough band name, though I had never heard of them. That night, I wasn’t all that interested in live music, as I was enjoying a mellow hang out with friends. So I was a bit irked when the band started playing and my companions started moving away from the corner Gauntlet machine and toward the stage. Though, the performance space was so small that it was only a matter of steps from the arcade to the stage.

The band rocked pretty well, a quintet producing a kind of keyboard/synth-laden funk rock, like if The Breeders were new wave and danceable with perhaps a hint of Pink Floyd sprinkled into the delivery.

At one point during the set, while the band was breakin’ it down, Tex, the singer, hopped down from the stage and started dancing among the 20 or so gathered people. He also happened to be dancing right next to me. The beat was infectious, and so was the fun he seemed to be having. But I can’t dance, at all. So I upheld the dignity of us both by maintaining my “stoic music appreciation” headbob-and-stare.

All in all it was a very good show, but as is the case with so many upstart bands, I expected to never hear of them again. Thus, it came as quite a surprise that, a week later, I was riding with another friend and discovered Red Book, Japanic’s album, while flipping through the CDs in her car. She was bummed when told her that they’d been in town and she had missed the show, but she let me borrow the CD, a favor for which I am infinitely grateful.

After that, the rest is history. I never did hear anything more of Japanic. At this point, it’s incredibly hard to dig up info about the band, but Space City Rock’s Houston Band Graveyard tells me that the group broke up sometime in 2003, after releasing a second album titled Social Disease. i’ll have to track down a copy of that.

Still, these six years later, that short-lived band continues to fascinate me.

Presented for your enjoyment, Japanic’s signature tune: Orpheus Express, which sounds like the funnest damn trip to hell and back there ever was:

The Social Disease at Amazon