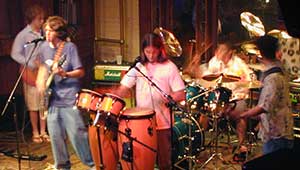 in 2001, suburban shakedown was a band of teenagers who had a band, the way a lot of teenagers do. unlike a lot of teenage bands (mine included), they didn’t suck too much. and rather than follow the conventional rock/country/hip-hop mode of amateur musicianship that is prevalent in the ambitious teenage set, this band of minstrels went for something more unusual. no, not techno or anything involving a computer. and no, nothing classical or in any way avant garde.

no, this group was a jam band, a kind of phish-lite.

i saw these guys a couple times in pensacola throughout 2001 and they were enjoyable. not great, but enjoyable. their album from the time, measuring peace, is the same way: competent grooves and pleasant riffs that are clean cut and inoffensive, but it takes an especially audacious form of young ruffian to write and perform songs about weed at all-ages shows where other teenagers and their parents are sure show up.

on a personal note, the members of suburban shakedown, at the time, were attending the same international baccalaureate program I had attended a few years before. i didn’t know any of the guys, but it was simply amazing how every one of them was a slightly younger and slightly distorted version of someone i had known.