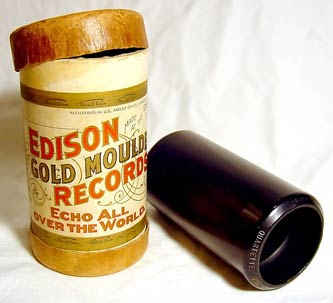 Growing up, my parents had (and still have actually) an old Victrola record player. It was completely machine operated; no electronics whatsoever. To use it, you had to wind a handle, which tightened a spring. Flipping a switch unwound the spring and started the disc spinning. A needle, of course, translated the record into sounds. Volume was controlled by opening and closing two doors on the front.

Along with the Victrola itself, my parents had a nice collection of records for it. I always enjoyed exploring the various old pop, jazz and orchestral standards, using those recordings as a window to the past. Plus, there was a subtle aural appeal to the tinny, lo-fi sound quality of the music.

As much as I appreciated it, the machine was a bear to use. The records were heavy, but delicate. The handle needed constant turning. And most records only had one song per side. As enjoyable as the time was spent, the effort forced my sessions to be rather short.

Since the mp3/digital music revolution hit full throttle, I’ve had a dream to start digitizing some of those old records before they deteriorate beyond recognition. Being able to drop them on an iPod would greatly enhance my ability to explore those recordings.

Unfortunately, I’ve traditionally lacked a suitable recording environment. Also, that Victrola now lives more than 850 miles away from me. So for the time being, it will remain a dream.

Good news on a related front though! The University of California, Santa Barbara has been digitizing the recordings in its wax cylinder collection. Some of those recordings are even older than the ones I listened to growing up. Some of the oldest in the collection date to the 1890s while the most recent is dated 1928. The project has been ongoing since 2002 and, as of this writing, the digital collection turns up 6824 individual recordings.

The collection isn’t limited to music. It includes sermons, speeches, vaudeville and other spoken word (try the Humorous Recitations)

Each recording’s entry includes detailed information about the performer, the release title and the date (if known). Audio is downloadable as both mp3 and unedited .WAV files.

Explore the catalogue, catch the streaming audio of Cylinder Radio or subscribe to the site’s RSS feed.

Here is a taste to get you started. It’s Johann Strauss‘ Blue Danube waltz performed by Edison Symphony Orchestra in 1902, when the piece was only 35 years old. You’ll recognize the tune.

There is something awe-inspiring about listening to music that was probably recorded before my great grandparents were born.