Part of the Countdown to Pocket Symphony Series

This post is part of the countdown to Air’s fifth album, Pocket Symphony, which will be released March 6 in the U.S. 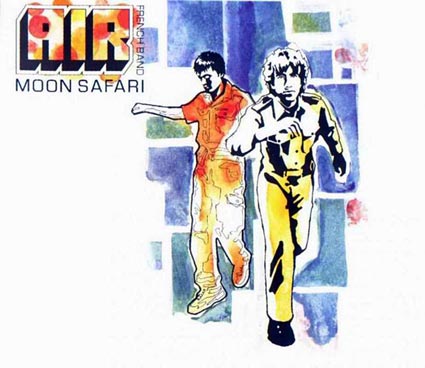 If Premiers Symptomes found our protagonists as the house band at “Le Casino dans la Lune,” then Moon Safari surely finds Air on its titular sojourn, casting off the confines of the lounge scene and setting off on a mission of exploration.

This, Air’s first album proper, launched the band’s career with spectacular fashion. It received nearly universal praise, debuted at number five on the U.K. charts and built a legion of die-hard fans “Air-heads?”. From its first moments, it is clear that Moon Safari is more adventurous than its predecessor. It still embraces the astro-pop sound of the 70s, but its scale captures much more grandeur. The rhythms have more funk, the melodies are complex and addictive, and the arrangements are layered into a dense and multifaceted pastiche of sophistication.

For nearly 25 minutes, through its first five songs, this record knocks out hit after hit, with each song ranking as five stars. The performance of that opening sequence is unmatched by any album in my iTunes library.

Powered by a mesmerizing bassline, La Femme d’Argent features sparkling synthesized melodies which quickly set the spaced out tone of the record. Sexy Boy follows with a pop formula that easily explains why the song was the album’s breakout single. Incidentally, that song, along with its b-side Jeanne, are the only instances of the [french band]’s use of French lyrics in their ten year history. Next up is All I Need, which brings the tempo down a notch, but the song is no less captivating for it. Kelly Watch the Stars picks up the pace for a fantastically fun aerospace romp that only has one sung line. Talisman then brings the house down with an ominous slow-building tension that battles with a powerful, sweeping string section.

After climaxing with Talisman, Moon Safari takes a turn toward the somber and contemplative. Whereas the first half of the album features some rather robust tracks, the second half turns decidedly low key. All in all, it’s still excellent, just not as breathtaking as the preceding songs. The only real sore spot on the record is You Make it Easy, a slow tempo love song with a few awkward transitions. Straying uncomfortably close to smooth jazz adult contemporary, the song earns the album’s only three star rating.

Redemption, however, comes in the form of Le Voyage de Penelope, Moon Safari’s finale. Featuring this incredibly dirty, distorted electronic melody, the song soars to new heights as the lunar adventure comes to an end.

Moon Safari is, without a doubt, a masterpiece, a perfect piece for cranking up and chilling out. It has been a personal favorite for nearly nine years now and it gets better with every listen. If you’re unfortunate enough to have not experienced it, here are a couple videos to get you started:

Previous in series Next in series