UPDATE March 26: After nearly a two month stint of being offline at the iTunes Store, the Star Trek TOS is back. The complete first season is available in its original broadcast form. Additionally, newly remastered episodes from the first season are available in their own section. At this time, iTunes is still the only source for them in their uncut form.

Since the first season of the original Star Trek was unleashed unto iTunes a couple weeks ago, there’s been some controversy as to whether the episodes are the original cuts or the new “remastered” versions that started broadcasting last year. Having not purchased any episodes, my original supposition was that the iTunes version were the same as the DVDs, since the new ones haven’t even finished broadcasting.

In fact, as of Jan 19, only 16 new versions have been aired, and of those only 11 have been from the first season (of the total 29 episodes).

But after partaking in this conversation at OneDigitalLife, I reexamined my assumptions and did some research and it looks like some of the episodes are indeed remastered. Space Seed for example. 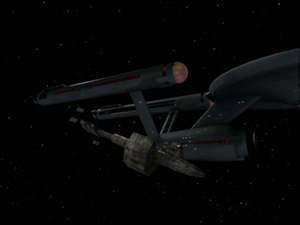 If Paramount/CBS/Apple are adding enhanced episodes after they air, that’s an interesting strategy. The iTunes Store is currently the only way, if you don’t record them on a DVR, to get a copies of the remastered episodes. It’s much like being able to download the recently broadcast episodes of Lost or CSI. Plus, iTunes is the only place to get full-length (not cut for commercials) versions of the enhanced episodes (for now)

There are some pitfalls to this approach however.

The store doesn’t indicate which episodes are new and which are not. Can we assume that every remastered episode that has aired can be found on iTunes after the airdate? Nope, some of the new broadcast episodes are on the store, some are not. Space Seed on iTunes is enhanced, as is Balance of Terror, while reviews say City of the Edge of Forever is not, even though all three broadcast months ago and all three broadcast before the show debuted on iTunes.

Also, if I were to buy Where No Man Has Gone Before today (the 19th) and a remastered version airs tomorrow (it’s on the schedule), would I then have to buy it again to get the new one? Probably yes. Same goes for any future remastered versions. My guess is that if I bought the whole season now, and the episodes were refreshed, I’d have to buy the remastered ones again.

Then there’s always the possibility that someone doesn’t want the remastered versions. That person would be stuck shelling out for the DVDs and just have to encode them themselves.

Update: CBS announced today that episodes of Trek remastered will be released on HD-DVD some time during the fourth quarter of 2007. Until then, iTunes is the only way to go.

7 thoughts on “Star Trek on iTunes update: Enhanced or no?”