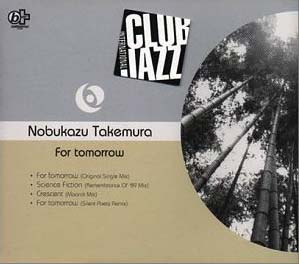 Bouncing off my recent Mudhoney post, I’d like to bring up Nobukazu Takemura once again. I was recently given the pleasure of listening to his For Tomorrow disc, which like My Brother the Cow, was released in 1995, and is the accompanying single to the album Child’s View. It strikes me that, even though the two records were released around the same time, Takemura’s offering appears to have aged much more respectably in terms of cultural influence.

It’s probably due to the fact that the Mudhoney record represents a waning of a particular style of music, a lingering breath of the fading grunge movement, which despite it’s continued popularity in some circles, can be easily dismissed as fad.

For Tomorrow however, is an early example of a style that’s grown and flourished since its release: future-jazz, which blends elements of american jazz with downtempo electronic music to create a relaxing environment.

Like most people who could be classified as ‘musical geniuses,’ Takemura appears to enjoy working in as many genres as possible; no two projects sound quite the same. For Tomorrow is barely recognizable as the work of the same artist compared to the glitch-inspired material of his later career. This record is both smooth and quite listenable. The female vocalist sings off-key on the title track, yet the backing music manages to compensate to the point where it sounds both disorienting and perfect at the same time.

The sounds and styles employed on this record would be echoed throughout the late 90s and into the 21st century as downtempo music increased in popularity, from the elaborate compositions of Tortoise to the seamless beats of Fila Brazillia, and that puts this record ahead of its time.