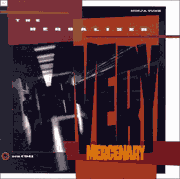 London’s The Herbaliser is one of those bands that takes its inspiration from just about whatever it can find. Featuring some extremely above-the-bar production values, the band specializes in a kind of funk-laden rap that borrows from and incorporates just about every musical style under the sun. Yet, despite the amalgam, each song is distinctly Herbaliser in its nature.

Lest you think that the band is all rhymes and loops, however, it should be known that the duo behind the act, Ollie Teeba and Jake Wherry, can write some immersive grooves. In fact, it’s The Herbaliser’s instrumentalizations that draw you in, persuading you to swagger and head-bob, even if all you’re doing is sitting at a computer. Add to that some smooth tag-team lyrics that, thankfully, aren’t misanthropic celebrations of opulance, and well, you’ve got the makings of masterpieces.

London’s herbaliser brings together a masterpiece on nearly every album and 1997’s blow your headphones is no different. hip-hop-funk-rock at its finest. it’s well composed and smoothly executed; listenable on its own, or as i played it, as some fine background music for a couple rounds of pictionary. i can’t recommend this stuff enough.

Dmitri from Paris‘ A Night at the Playboy Mansion is similar, in that it is also dance-related, but it’s more what I’d term "special purpose music." You see, Dmitri from Paris is actually DJ Dmitri and this album is an example of the most dubious of musical achievements: a mix-album. the idea that someone can stitch together a bunch of somebody else’s songs and essentially laud themselves for the transitions between songs, is just peculiar. I did it in high school, back when we made "mix-tapes," and it’s not that hard. I even did it for free. in the age of the instantly-assembled iTunes playlists and do-it-yourself mixes, the goal of the commercially-released mix-album seems absurd.

That said, A Night at the Playboy Mansion works. dmitri brings back the flavor of those decadent days of disco, for about an hour. But its success is also its failing.

I call this "special purpose music" because it’s not really listenable on its own. It works great to set a party mood or get the energy pumping–anything required to turn on and tune out. Heck, I had it turned up while cleaning the house this weekend. And that ability makes this a record worth keeping, despite my inclination to dump it.