Yeah, What They Said is a new feature on tunequest. Some people call it “link sharing.” These links won’t necessarily be music or iTunes related, but I’ll try not to stray too far from the topics on this site. Mostly though, it’ll be stuff that’s cool, but that I don’t have time to write about.

Behind the Mario Maestro’s Music:
Koji Kondo was in his mid-20s when he wrote the iconic music for The Legend of Zelda and Super Mario Bros. for the NES, but he doesn’t compose much these days. Wired takes a look a him.

10 Albums in 10 Minutes: Classic albums cut up and squeezed into 60 seconds of playing time.

If You Can Read This, You’re Hired: How would you find a really good typographer? Would you use dingbats? If you can decipher these ads by 3/25, you could get a 1-year subscription to Indesign Magazine.

When I was in middle school, I became a big fan of the first few entries to the Mega Man series of games for the original Nintendo Entertainment System. Game play was straight-forward. The stories were fairly one-dimensional Mega Man good; all others bad, but exciting. And each level, named for an element or mineral (Bubble Man, Heat Man, Air Man, etc), proved to be a uniquely constructed world, incorporating imagery and themes related to the mini-bosses’ namesakes.

But the best part was the music, especially Mega Man 2 and 3. I enjoyed the music so much I put together a compilation of songs from the various levels by holding a cassette tape recorder next to the TV speakers and precisely pressing buttons on the controller at the same instant I pressed “record.” Despite being constrained to the NES’s primitive sound capabilities, the music from those games showed a compelling attention to rhythm, melody and harmony.

Which brings me to The Polish Ambassador, who simultaneously hails from both the farthest reaches of the known galaxy and Chicago. He is a musical envoy on a peaceful mission to evangelize his Polish heritage and electrify but not electrocute you with his powerful outer space grooves.

I’ve been keeping tabs on him since I stumbled across one of his songs at Last.fm several months ago. So when he asked me to review his recently released debut album, Diplomatic Immunity, I said that I would be thrilled to do so. And today, I got my very own cosmic Valentine’s Day present in the form of a compact disc.

Which is appropriate, because I *love* this record.

It rocks in a way that only multi-layered synthesized jams can. Much in the same way that working with a limited sonic palette forced early NES composers to rely create complex tonal patterns and melodies, The Ambassador bends the electronics to his diplomatic will, creating deep, engaging arrangements that belie the simplicity of its timbre.

The influence of early game music and culture is unmistakable here, from sounds themselves (Infiltrating the U.N. features a direct SFX sample) to the bit-mapped pixel art that adorns the disc and jewel case. These instrumental tunes could almost be the soundtrack to their own game, circa 1985.

I say almost because the passage of 20+ years means the The Ambassador is not restricted to the meager capabilities of an ancient game console. Where those compositions would end, Diplomatic Immunity takes off, adding fantastic beat after fantastic beat. This stuff is so groovy that each listen has the potential to kick-start the best damn dance party this side of Canopus.

Clocking in at 20 tracks running over 56 minutes, the record doesn’t disappoint on both substance and variety. And while there’s not a bad song in the lot, the real standout is Earth versus the World, which also happens to have a pretty nice video. Also, for pure dancetasticism, it doesn’t get better than the album’s finale, Crunching Numbers. You’ll swear you’re dancing in the middle of a laser battle.

Visit The Polish Ambassador’s website to learn more about his mission, his jumpsuit, his grooves (with samples), to download free bonus tracks or buy the CD, which is also available from the iTunes Store.

If clicking links isn’t your bag, you can check out the Earth versus the World video below. 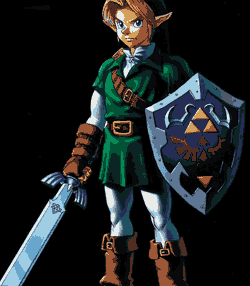 Even in 8-bit audio, the theme to The Legend of Zelda is a rousing piece of music. But add a full orchestra to it, and you have something phenomenal. The Tokyo Symphony really imbues the song with both an expansive power and a lofty tenderness. Give it a listen:
END_OF_DOCUMENT_TOKEN_TO_BE_REPLACED