I was digging through a box of cassette tapes here at the tunequest compound and happened upon a handful of bootlegs from my tape trading days back in the 90s. Shows by “alternative” artists like Beck and Weezer early in their careers. Somewhat surprisingly, most of the shows have informative tape jackets, complete with show dates, venues and setlists.

But there is one which has no jacket at all. And the tape itself is simply labeled “Velocity Girl (live)”. I have no idea when or where this show took place. Having listened to the tape, there aren’t any clues or statements by the band or audience that hint at a time or place (though I think Sarah Shannon may have said “Thanks to the Dispatch” at the end of the show. Possible evidence there). From the song selection, I guess it’s a show from the group’s ¡Simpatico! era, which would put it anywhere from late 1993 to early 1995.

And Google has been of no help. Velocity Girl may have been the second biggest band on Sub Pop, but in the 15 years since they broke up, the band has slid into the murky depths of obscurity. Information about the band’s history is scarce these days.

So I’m throwing this to the Internet. Hopefully, a fellow tape trader or Vgirl fan has this show or knows something about it. If you recognize the setlist, please let me know. Thank you!

This is unrelated, but after the end of the Vgirl show, on the unlabeled back side of the tape, is a live in-studio performance by the band Trans Am at WPTS radio in Pittsburgh. This is a recording which I do not recall having ever heard or known about. The performance is followed by standard on-air programming from the radio station until the tape runs out.

This existence of this recording is completely baffling. I started listening to Trans Am in spring 2002, which is about six years after I got the Vgirl bootleg. By 2002, I had already gotten my first iPod and was leaving the world of cassette tapes behind. But most importantly, I’ve visited Pittsburgh twice since then, and neither time was I packing a box of ten-year-old cassette tapes with me. So I’m certain that I didn’t make this recording myself.

It would help if I knew the date of the performance at WPTS, but once again, the Google fails me. I can find no references to this radio appearance anywhere. The DJ even mentions that they’ll be playing at a venue called “Cloud Nine” in the evening, but I can’t find any references to that either. I don’t think it exists anymore.

The only conclusion I can draw is that this Trans Am recording was already on the tape when I got it. But of course, I don’t remember when or from whom I got it. By all appearances though, it would seem that I had a bootleg in my collection for a band I wouldn’t actually discover until several years later. And the thought of that kinda blows my mind.

Whenever and wherever it came from may never be known and it may forever be a tape of mystery.

A recording of the show is available on SoundCloud. 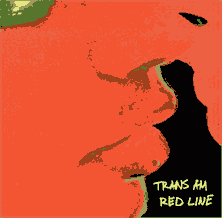 Trans Am’s brand of future-rock has been of constant interest since the day I first heard it in early 2002. I appreciate their hard-drive rhythms and computerized effects. In fact, before i knew any better, I thought the group was from Germany. Turns out they’re actually from Washington, DC, which is why I also appreciate that they tackle political material in a way that’s direct and clever, but not too clever.

However, I have to take issue with the group’s 2000 album, Red Line. This was indeed the album that started my fascination with the band, but really only on the basis of two very good songs: I Want It All, and Play in the Summer. But after yesterday’s tunequest listen, i have to admit to myself that the rest of the album is fairly uninteresting. I mean, the albums left such an amorphous impression that I can barely remember what it sounded like specifically. I’ll hang on to it though; I never know when it might strike my fancy.

Play in the Summer, live in Austin. It’s not as good as the album version, but it gives you a good idea.