This past weekend, I saw The Simpsons Movie and must declare that I thoroughly enjoyed it. I know it’s become a bit of pastime to bemoan the show’s decline, but honestly, you won’t find much cynicism coming from me with regards to the movie. The plot is straightforward, but fittingly expansive and engrossing for a motion picture. The jokes are actually rather good, largely avoiding the Homer-is-so-grossly-incompetent-that-its-not-funny-anymore humor that plagued the show for a long time. The film also resists the temptation to recycle material from the past eighteen seasons worth of shows, injecting new ideas and wit into the franchise.

All the family members receive a fair amount of screen time and character development, and that goes a long way toward helping the movie succeed. The Simpsons has always been at its best when it has shown the family being a family. With a running time that’s the equivalent of four episodes, The Simpsons Movie is afforded the opportunity to linger on that familial interaction. Heck, for the first 25% of the film, the audience is treated to extended scenes of the family members being themselves.

Bart and Homer hang out and the father-son camaraderie is endearing. Lisa campaigns to save Lake Springfield from pollution (and gets a love interest in the process). Marge is a domestic goddess who worries about everything while doing her best to keep the family together. And Grandpa is, well, Grandpa.

Everyone’s favorite secondary characters, Moe, Lenny, Carl, Burns, Smithers, Apu, et al, received their own choice moments and lines throughout. Even the show’s cavalcade of tertiary characters make appearances, but not to the point of distraction; for the most part they’re limited to simply being drawn in the background so that long-time fans can look and say “Hey, there’s that kid Gavin from the episode Marge Be Not Proud.” You’ll know this scene when you see it. 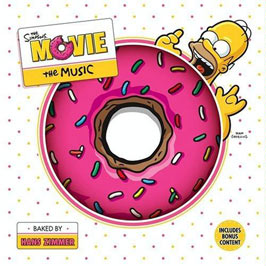 And the music… I was actually surprised to hear how good it is. I was a little wary when I learned that Hans Zimmer was composing. His music is decent enough, though truthfully I’ve never found it that compelling (exceptions being Gladiator and parts of Mission Impossible 2), and in general, he’s just so… corporate. And safe. Whenever a big-budget hypefest needs some backing tracks, Zimmer seems like the man to turn to for music that’ll be inoffensive to the highest number of people.

Fortunately, my trepidation in this case was ill-founded. Zimmer does an excellent job of taking the “Simpsons sound” (developed by Danny Elfman’s theme and Alf Clausen’s eighteen years of television scoring) and expanding it to fit the big screen. The music, like everything associated with the film, remains in character, just embiggened.

The disc starts with a grand orchestral interpretation of Danny Elfman’s main theme, which at first feels a bit off-putting after nearly two decades familiarity with the original version. But that quickly fades as the new orchestra does it justice. Overall, the album tends to borrow a great deal of inspiration from Danny Elfman’s sense of playful quirkiness. The movie’s main motif is built around uptempo mischievousness, like if the Jetsons were playing a prank.

It’s not all fun and games though. Like any dramatic film, The Simpsons Movie requires its share of suspense and seriousness, which the music delivers effectively without being distracting. One of best moments on the entire album comes at the beginning of the track You Doomed Us All… Again, which features a tender, melancholy duet between piano and flute.

Through and through, this album impresses. The only sour spot of note is the album’s closer, a track called Recklessly Impulsive, which is a high-BPM techno remix of some themes from the film. After 40ish minutes of stellar music, it’s a little bit jarring and major let down.

Despite the somewhat disappointing finale, I look with just a little amazement at how well both the film and album turned out. I went in with an open mind, but I didn’t exactly have high hopes. Combined, the movie and the score might just be the best pieces of culture I’ve run across all year.