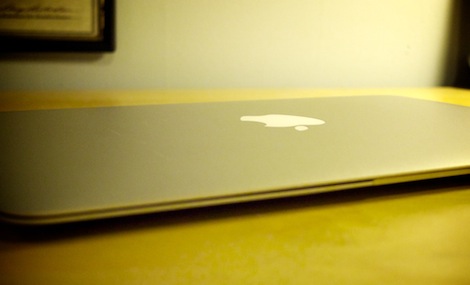 Hey folks. So I picked up one of Apple’s new MacBook Air notebooks. I had been wanting a more portable computer than my trusty tote-able 2008 MacBook Pro and the new 11.6″ form factor was mighty tempting. I did spring for the BTO 4GB RAM upgrade, but I opted to stick with the stock 64GB hard drive.

My first impressions are, like a lot of other reviewers, that despite its relatively slow clock speed the machine is fairly snappy and capable of doing more than just writing and web surfing. Yes, you can do real work on this thing. You just might have to have some patience during certain tasks.

After using it for about a day, installing programs, copying files (WIFI only) and running some usage tests I’ve come to two principle conclusions:

No usage summary would be complete without a few benchmarks, so I put together a suite of tasks to compare the performance with the other Macs in my house. The contenders:

The tests included start up time, video encoding, misc usage tasks and working a Parallels 5 virtual machine to do some geospatial analysis.

From the numbers we can clearly see that the faster processor in the 2-year-old MacBook Pro makes a big difference when crunching numbers. In all the CPU tests, the Pro performed the task in about 66% of the time as the Air. The real surprise (and disappointment) is where the Air barely keeps up with a 5-year-old iMac using an older chip architecture in the Python and Handbrake tests. (Though I suppose it shows that a 1.4 C2D can do the work of a 1.8 CD, which I’m sure helps with heat and power consumption).

One thing to note though, is that despite all the intense processor usage, the Air barely got warm. During the video encode test, while Handbrake was doing its best to max out both cores, the Macbook Pro’s fan kicked on to full speed after about 1 minute. The Air on the other hand stayed cool and quiet the entire time. This bottom comfort is something my lap and legs are sure to appreciate.

But what the Air lacks in raw power, it makes up for in responsiveness. It’s hardly possible to get it to hiccup, even when running tasks in the background. I was able to use Aperture to edit some RAW photos without any significant slowdown while copying 6 gigs of files to the Air. Kernel_task was chugging away at ~50% usage in Activity Monitor without any noticeable effect on the overall system performance.

And this is where productivity gains will be made with the Air. In all the tests above, the processes running were the only active applications and that’s rarely how I work. I often have multiple browser windows open and Mail and who know what other apps going simultaneously. Look at the Safari launch test. With both Aperture and Parallels open, the Air launched Safari almost instantaneously while on the Pro it bounced in the Dock for 25 seconds. Similarly, Parallels’ disk-based performance (waking the VM) slowed significantly when other programs were open competing for resources. If the Air can keep the dreaded beach ball from the showing itself, then I will be a happy, less frustrated Mac user.