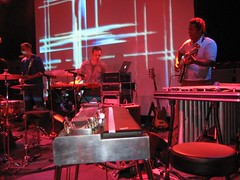 Tortoise at the Independent
Originally uploaded by Luiza.

Whereas my previous iPod, a 3rd generation model, could not display album art, my new one, of course can. So I spent a portion of my morning going through my library, searching for albums that were missing their covers. During the process, I ran into a couple live shows that, since they aren’t formally-released albums, obviously don’t have album covers.

Most music clubs I’ve been to in recent years seem to have a laid-back “we-don’t-care” policy toward shooting photos of the acts that roll through, so it is not uncommon to see folks with digital cameras snapping away. Heck, I even saw someone with a video camera (or possibly 8mm) at a recent Ratatat show.

Even if a venue does prohibit recordings and photography, the rise of cell phone cameras and pocket point-and-shoots almost ensures that some clandestine pictures will escape.

Knowing this, I went over to Flickr, where a good portion of the world’s digital pictures eventually end up. I hoped to find, if not pics from the specific shows, something close enough for displaying on my iPod.

The mission was a success. A couple searches later, I found a really nice shot from the exact Tortoise show at The Independent shown above. I did not, however, track down anything from Mouse on Mars’ performance at Lee’s Palace. But I did get a nice one from the show in Montreal the day before and that’s close enough for rock and roll.

Those two shows now have some nice iTunes artwork. 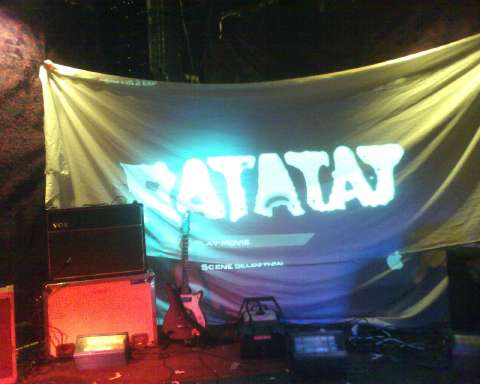 On the evening of March 9, 1994 I attended my first and only Pearl Jam concert at the Pensacola Civic Center in, you guessed it, Pensacola Florida (where PJ guitarist Mike McCready happens to have been born). I was a freshman in high school at the scampy young age of 15 and, having just discovered the full breadth of grunge six months before, I reveled in the notion that one the top bands in the scene would be swinging through my podunk.

(so as not to forget my roots and to illustrate how far I had come, I’ll mention that the civic center is the same venue where I saw new kids on the block just a couple years before. Funny story there. I received tickets to the show as birthday present at the height of the group’s popularity. For some reason though, the show was postponed and by the time the rescheduled date rolled around, the group’s "Cool" Factor had dropped considerably. Still, it was fun; They had lasers. Freakin’ lasers!)

Anyway, the Pearl Jam show rocked. However, the occasion that brought them did not. This show was held as a benefit in response to the murder of Dr. Gunn by an anti-abortion nutjob in pensacola the previous year and is an early example of pearl jam’s nascent politicism. Dr. Gunn’s death was also one in a series of news stories that garnered national attention for pensacola, but always in a negative spotlight, including a second doctor killing, hurricane ivan and the pensacola: Wings of gold tv show.

I remember in the weeks before the show, there were rumors about L7, who were opening for Pearl Jam and there was a constant buzz about more religious nutjobs issuing death threats and staging a massive protest of the concert. Despite that, or maybe because of it, the show was a huge community event. I stood in line for hours on a cold february morning with my dad at a ticketing booth on pensacola nas hoping that the show wouldn’t sell out before our chance to buy tickets. We did, thankfully, manage to get a couple, even though the show was the fastest selling concert in the history of the city at the time.

By the day the show arrived, the excitement was palpable. There were additional rumors that the band had been spotted at a local guitar shop. This was never confirmed though. That afternoon brought one of Pensacola’s notorious thunderstorms, which continued until almost show time. This had the effect of dampening the enthusiasm of any would-be protesters. However, security at the Civic Center was still heightened; Everyone going in had to show their ticket and empty their pockets to prove that they were not carrying any weapons.

I had arrived late, taking my seat at the rear of the venue as the first opening band, Follow for Now, concluded its set. My seat may have been in the back of the venue, but I had a direct view of the center of the stage and a wide vantage point from which to observe the entire experience. I swear I’ve never seen as many people inside the Civic Center as I did that night at the largest Rock for Choice concert ever held.

Most of my memories of the show are a blur, these 12 years later, but I still sharply recall the iconic image of Eddie Vedder, lit by a single spotlight, gently singing Tom Petty’s I Won’t Back Down. Fortunately for my memory, I found a bootleg recording of the show a number of years ago (the date on the files say september of 2000. It’s a little disconcerting to think that it took me six years after the show to find the recording, and it’s been another six years since I found it). It happens to be the only recording that I own of a concert that I’ve attended. The sound quality on the recording is quite good, the only unfortunate part being it cuts off 54 seconds into Porch. Still, whenever I want to travel back in time, all I have to do is press “Play.”

My lowly 15gb iPod, maxed to its capacity, can only store about 2000 songs at a time. At the moment, it houses albums ranging from 0-N (not including albums that begin with ‘the’). Thus, I have not had any Ratatat grace my eardrums in quite some time. And man, i have been jonesin’ for it, with no relief in sight.

But in this junkie’s darkest hour, I stumbled upon a ray of light called CBC radio 3, with its vending machine of archived performances available for all kinds of streaming pleasure. God bless those Canadians; they had a 2004 performance by those electro-synth-rockers queued up and waiting, just for me.

Now I can slip on my headphones and have a prolonged and gentle heroin shot of that driving melodious Ratatat sound and wait in anticipation of their album’s arrival on the tunequest.

Addendum (9:58pm): just discovered that the iTunes music store has a heretofore unknown (to me) Ratatat b-side: "Noose." Yeah, I had a couple free downloads; yeah, this was one of them; yeah, it’s good, very good.