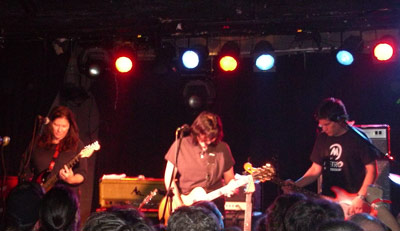 I just pulled in from midtown Atlanta, The Loft, specifically, where The Breeders just put on a hell of a show. I’ve been a big Breeders fan since the Last Splash days (14 years ago). Yet due to the band’s somewhat sporadic history, tonight was my first opportunity to see them play live. And what a great performance they put on.

The band was in good form and in good spirits, clearly having a good time.

This was the last show of the tour (or as Kim Deal said at one point “the last tour of the show”). Maybe it was just road exhaustion, but the band was positively loopy. Or maybe everyone was just in a good mood. Jokes were told, funny faces were made and anecdotes were shared. At one point, Kim introduced the band’s third guitar player Cheryl, mentioning that she was from Florida and asking who else in the audience was from there as well. In response to a number of “whooops” that erupted from the crowd, Kim said “We’re from Dayton Ohio, so we got you there” and merriment ensued.

The show itself covered the gamut of Deal-related material, including songs from The Amps side project. In fact, the show opened with Tipp City, which happens to be one of my favorite Amps songs. Last Splash got some good treatment, with renditions of New Year, No Aloha, I Just Wanna Get Along, Divine Hammer, a sublime version of Drivin on 9 and of course Cannonball. A house-collapsing performance of Saints closed the first encore.

The Breeders latest album, Mountain Battles, was also well represented. Bang On, We’re Gonna Rise, Here No More, Night of Joy, German Studies, Walk it Off and No Way all made appearances.

Noticeably absent though was much of the material from Title TK. Huffer was brilliant, but other than that I don’t remember the band playing any other song from that album. Similar story with the songs from The Breeders’ debut album, Pod. Only a handful from there as well: Iris, Happiness is a Warm Gun (Beatles cover) and one of my most favoritest songs ever Fortunately Gone, which closed out the second encore, the show and the tour.

A perfecting end note for a wonderful experience.

Given just how great a band The Breeders are, the sporadicness of its output can be quite frustrating. But going to bed now on a natural musical buzz, I can say that after seeing the band perform live, I have accomplished a life goal that’s been with me for nearly one and half decades.

I leave you with Bang On, from Mountain Battles, performed Live in Atlanta, June 13, 2008:

I spent a portion of this Saturday going through my extended archive of music, the stuff that’s not in my central, everyday iTunes library. Most of those files are a bit old and for either quality or tagging reason, they’ve been left unincorporated. Some of these songs have been sitting untouched and unlistened to on cds and hard drives for years.

So I’ve decided to start sorting and evaluating them for re-inclusion into the main library, checking the ID3 tags, bitrates and such to make them conform to my standards.

And of course, I’m making sure I still actually like the song. In the case of this one particular song, Bjork and PJ Harvey covering the Rolling Stones’ Satisfaction (I Can’t Get No) at the 1995 Brit Awards, I was sure it would be gangbusters.

Turns out it was lacklusters. I didn’t much care for it. Somehow, they mangage to go over-the-top without doing anything at all.

So I’m deleting it from my collection. But not before I give it away. If eight-year-old mp3s are your thing, and the prospect of a Bjork/PJ Harvey duet makes you salivate in anticipation, download away.

Just so you know what you’re getting yourself into, there just happens to be a YouTube video of the performance:

The ringing in my ears serves as a reminder that I have permanently lost a portion of my hearing, but I’m telling you it is worth it. I just got home from Ratatat’s show in midtown Atlanta and I have something to admit to you:

Seeing Ratatat perform live is one of my favorite things in the world. This show marks the third time I’ve managed to catch a performance and each time has been simply mind-blowing. 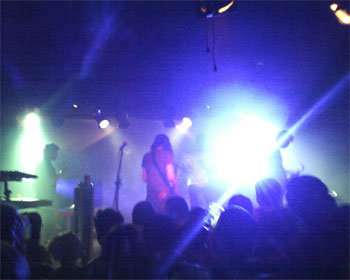 In studio, Ratatat’s synthesized beats are phenomenally addictive and their guitar melodies rock oh so much. But live, man, there’s this power and richness of atmosphere that creates a unique kind of sonic ambrosia that’s rare in modern popular music.

If I had the means, I would totally follow them around on tour.

For a good explanation of the Ratatat sound (and better photos of the show), check ohmpark’s write-up. Though I hesitate to lump Ratatat in with the 8-bit sound crowd. In fact, I think the band could hardly be farther from it. 8-bit operators rely on the primitiveness of early game music as the source and inspiration for their sound, whereas Ratatat is clearly coming from a traditional rock background (whaling guitars!) spiced with a danceable groove and almost baroque composition style.

Ratatat will play a few more date in the U.S. and U.K. throughout April. Go see them if you can.

For a taste of the Ratatat live experience, check out this crappy cameraphone video clip I shot during Lex, one of the rockin’ist songs in the repertoire.

For a better experience, try this video of the band performing in Seattle in September 2006. The songs are El Pico and Wildcat: