This article is also a guest post for Webomatica, who asked me to fill in for a day while he’s in Japan. Appropriately, I think, I dove through my library and pulled out some of my favorite Japanese albums. Enjoy…

Yokota is a musician of the sonic contortionist variety, meticulously sculpting sounds and bending them to his will. Symbol features some delicately constructed mashups of classical music, with passages that are both instantly recognizable and relatively obscure. Lightweight and easy on the ears, this album is sonic bliss that samples predominantly from the western musical heritage. It’s an engagingly mellow aural experience. Read my full review.

Listen to Traveller In The Wonderland:
[audio:070123TravellerInTheWonderland.mp3]

Similarly, I would also describe Cornelius, who takes his pseudonym from Roddy McDowell’s character in Planet of the Apes, as a meticulous creator of sounds. But high art isn’t his game; his level is clearly that of catchy pop numbers and urban culture. In the early 90s, he came to fame in Japan as part of a mostly straight-ahead pop outfit called Flippers Guitar. Since then, he’s embraced a kind of whiz-bash indie electronic eclecticism, which comes to a head on his magnum opus. This record is the reason I’ve called him Japan’s greatest natural resource.

Listen to Another View Point:
[audio:070327AnotherViewPoint.mp3]

This album may have been released in 1999, but as the title suggests, it might as well have been set much earlier. As for the particular sound of the 70s, this isn’t disco, or funk, or classic rock. It’s smooth and jazzy with a retro lounge feel. Sunahara, who is positively obsessed with TWA-era airline travel, pulls out a soulful downtempo groove that will make you feel like you’re waiting to jet off to London from the terminal at JFK.

Released at the peak of Tokyo’s so-called Shibuya-kei scene (the emergence of which had parallels with that of American grunge–but that’s another story), P5’s Happy End of the World is filled to the brim with the ultra cute, ultra stylish and ultra smooth vibe with a little tongue-in-cheek mixed in that makes the world created by this music so inviting for American hipsters and hipster wannabes. It also doesn’t hurt that the album is expertly crafted, with wide-ranging musical influences layered on top of some very infectious beats. However, for all the sophistication this album exudes, there’s a certain childlike giddiness to the whole affair. This album ranks among my all-time favorites.

Extra credit. Japan for the past 15 years or so has been cranking out some excellent music. Check out the stylings of: Yoko Kanno/Cowboy Bebop, Nobukazu Takemura, Cibo Matto, Fantastic Plastic Machine. Explore them at your leisure.

Cornelius is more than a man, more than a musician. He is an idea, the result of thousands of years of simian evolution combined with Japanese tech brilliance and flair. Fortunately for the world, he uses his powers for good, spreading grooves and good cheer from the Land of the Rising Sun to all points on this earth.

If there’s any doubt that Cornelius is Japan’s greatest natural resource, here’s the proof. The song is Smoke. The man is Cornelius. The album is Point.

Download the song Point of View. It’s glitch-funk artistry at its finest. 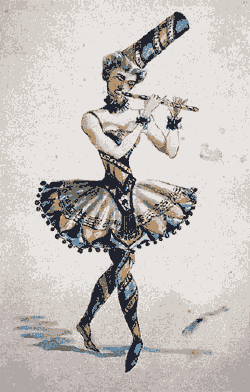 You know, Tchaikovsky wasn’t all that pleased with his Nutcracker and I’m sure he would be both surprised and concerned about its modern-day popularity, particularly in America. Regardless of his feelings however, it is, in this writer’s opinion, indisputable, that the ballet (and especially the concert suite) is a fine, enjoyable composition. Maybe it’s because the pieces are simple, but clever. And if there’s something that Americans enjoy, it’s things that are simple and clever. Snide remarks aside, the Berliner Philharmoniker’s 1966 performance under Karajan is spectacular.

quickies:
though delay 1968 is before the bands’ prime, can delivers one fantastic song (‘thief’) on top of a ground-breaking album.
i’ve heard cornelius has been described as japan’s greatest natural resource and can pretty much confirm that.