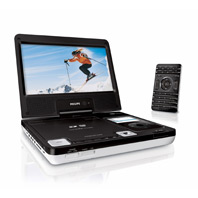 Though sold and marketed as a portable device, I’ve recently been intrigued by Philips’ new DCP850 DVD player with integrated iPod dock. It boasts support for standard DVD, DVD+/-R(W), VCDs, DivX files, MPEG-4 files, compact discs, MP3s and photos. It also features an SD/MMC card reader for playing movies and photos via a memory card. The iPod dock, of course, charges the iPod and allows access to and playback of all the content on it.

It’s not fancy wireless like the Apple TV, but the DCP850 certainly seems more versatile. At $199, it’s $100 cheaper than the Apple TV as well.

Using standard A/V cables, the DCP850 can be connected to a television and I’m thinking I might eventually replace my DVP642 with it in my set-top setup. Being portable would just be a seldom-used perk. The device will accept and play all the DVDs and DivX files I currently have in my collection, plus any videos on my iPod, which tend to be transitory M4V files. And the SD card reader opens up a lot of possibilities for replacing the CD-RWs I currently use for temporary AVI files and non-H.264 M4Vs as well.

At the moment, the DCP850 is so new that there’s not a lot of real world reviews of it, but I’m certainly keeping my eye on it.

More Info:
DCP850 at Philips.com
Review at ilounge.com
Get one from Amazon.com 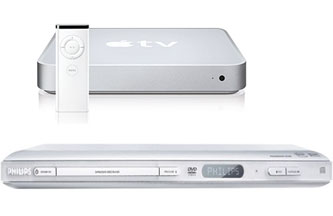 When it comes to digital video, I’m no novice. Several years ago, I made my own VCDs and, as the technology developed, moved to the DivX/XviD codec. I also already own a Philips DVP642 DVD player, which can play DivX/XviD-flavored AVI files in addition to standard DVDs. In fact, I have a much-neglected site dedicated to Mac users who own the DVP642.

The conundrum is that, out of the box, the Apple TV will play Apple-approved video formats, M4V using mpeg-4 and H.264 codecs, but not AVI using Divx/XviD, while the opposite is true of the DVP642. Additionally, the Apple TV, of course, does not have any kind of disc player, which makes it hard to use my existing video collection.

I already have a substantial number of files in DivX format, tucked away on DVDs, ready to be played on short notice. I’m not exactly keen on the idea of having to spend the time to convert those files to M4V, store them on a drive and then manage them in my iTunes library, which is already bursting with music alone, especially when I can just watch them on my DVD player with zero additional effort.

Now, I’m not entirely dissin’ the Apple TV. Paul points out that if you can get the full Mac OS X installed, the thing makes an attractive file/web/torrent box and Apple Gazette says that it’s well-suited to watching video podcasts. But after more than a year and a half of owning a DVP642, I must say that I find the DivX+DVD to be both an excellent usage method and an expedient storage scheme. It does lack the polish and finesse of Apple’s solution, but it works, is cheap and scales well.

Complicating matters, however, is the fact that I also own an iPod with video. Like the Apple TV, it only plays M4V. After six months of use, I’ve discovered that iPod video is great for temporary content, videos that I’m going to watch and delete, whether it’s a recent episode of The Daily Show or a movie for a long plane ride. When I’m finished with it, into the trash it goes, freeing me of management headaches and storage concerns.

The downside is that it can be unwieldy to watch an M4V file (or iTunes Store purchase) on my TV, should I so desire. In a pinch, I can connect my iPod to the TV using a cable that came with my six-year-old camcorder, but that’s a bit of a hack.

If only there were a device that would let me easily watch (read:no hacking) both my more timely M4V files, as well as archival AVI and regular DVDs.

Previous in series Next in series