Seriously, I don’t mean to be neglecting this place. And perish the thought about it being abandoned. Things have just been busy around tunequestlandia lately. I’ve not had much time to read this month, much less write about anything.

So, how about a quick RatingQuest update?

If you’re at all interested, here’s the pie chart of the current ratings breakdown: 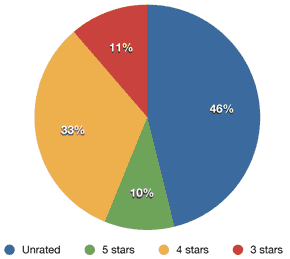 It shows basically what I’d expect: the majority of my ratings are what I consider to be “good” songs, pleasant enough to listen to at any given moment, while 10% are exceptional. Note: I don’t use one and two stars for rating purposes.

Anyway, here’s hoping I find the time and energy to get back in the publishing saddle soon. In the meantime, feel free to explore the archives or be adventurous with a random page.

Links to interesting stories. This edition is long overdue.

Medialoper: 5 Ways to Improve eMusic
I love eMusic. At ~$0.25 per song, it’s easily one of the best values in the digital download arena. While generally functional, parts of the site could use some overhauling. Medialoper leads the discussion on how.

Cognitive Daily: Even the musically untrained respond differently to new symphonic movements
“A new study of brain responses to music has found a striking difference in brain activity when a symphonic movement ends and the next one begins, compared to other parts of the musical work.”

Fredflare: Rad Chat with Ratatat
Fredflare talks it up with Evan Mast of Ratatat, one of the greatest bands of the current millennium. Amongst other things, he explains the origin of the band’s name:

The band was originally called Cherry, but there was conflict with other bands using the same name so we had to change it. We just sat down and brainstormed for a few days. It was slow going, but then the name just popped into my head and it was the first idea we’d had that we didn’t absolutely hate. After a while we even started to LIKE it. Now I really like the name Ratatat and I don’t like Cherry much anymore. Cherry” made us sound like sissies! “Ratatat” makes us sound tough, right?

Hollywood Reporter: Unique stories lie behind every licensing deal
A series of anecdotes about the various licensing deals a number of artists have entered into and the effect those deals have had on their careers.

A lot of people claim that they can’t hear the difference between a 128kbps file and a 256kbps file. This video proves that there is indeed a difference.

I think every English speaking person in the world should read this story all the way to the end. It’s a life-changing experience. After you’ve finished, you’ll probably want to die, or kill, or both.

Have a non-iPhone phone or PDA with audio capabilities? Out-of-the-box, iTunes doesn’t offer much in the way of getting audio files onto them. SyncTunes however, might be your savior.

As of today, my active library contains 15,601 songs. Of those songs, 7,501 have been given star ratings, leaving 8,100 unrated. So, just as I spent last year listening to every song in my library, I will spend the rest of this year working to completely rate my library and assign stars to as many songs as I can.

The effort I’m putting into this is substantial, but not as all-consuming as the tunequest was. I’ve got plenty of audio to listen to without devoting huge swaths of time to this project. Hopefully, I’ll break the 10,000 mark by the end of the year.