In addition to all the hullabaloo about the new iTunes 7, here are the minor enhancements and changes I noticed while exploring.

There’s a new music tag called “album artist.” I’m not sure what it’s used for yet, but it could be for compatibility with windows media files. UPDATE: From glancing around the interweb it seems as though album artist is in fact used by wma files, but i think iTunes 7 still doesn’t play them (i don’t have one to test). within iTunes, however, it looks like the tag is most useful for when a song has a guest artist in addition to the main artist, like Basement Jaxx featuring J.C. Chasez. Under the iTunes 6 scheme, I had been putting that info in the comment field. I’ll let you know how it works, when I try this method.

It could also be useful for classical music in situations where a soloist or vocal is featured in addition to the orchestra. On that note, please allow me to plug my classical music tagging article, which was written for iTunes 6, but still applies today because of the iPod’s shortcomings.

Album Artist is not respected by the iPod, however, at least not iPod Software 1.2. Songs continue to be sorted by the Artist tag alone, which of course makes the new tag almost useless. I say, “almost” because I did find one use for it. Also, I have additional criticism of the Album Artist tag with regards to the iPod. 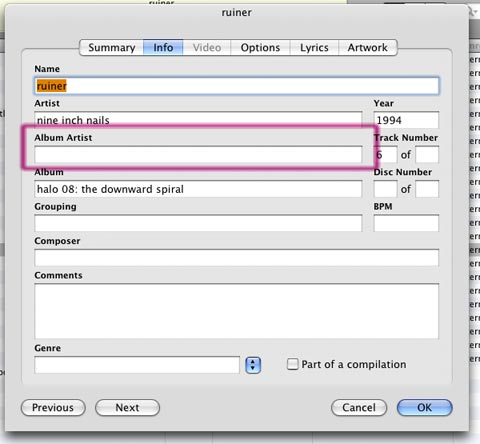 And it looks like you have to tell iTunes that your songs are gapless. If you’re using Crossfade playback, click “Part of a gapless album” to keep seamless songs together. Look under the song options. Thanks Brian! 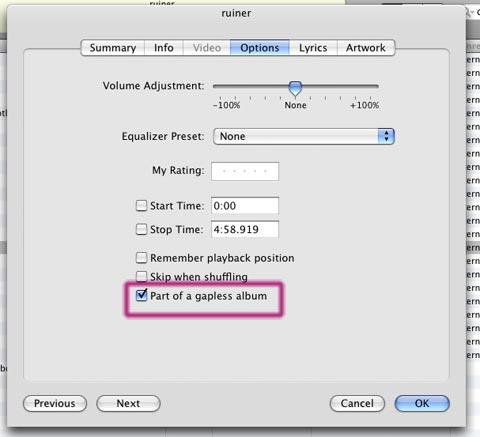 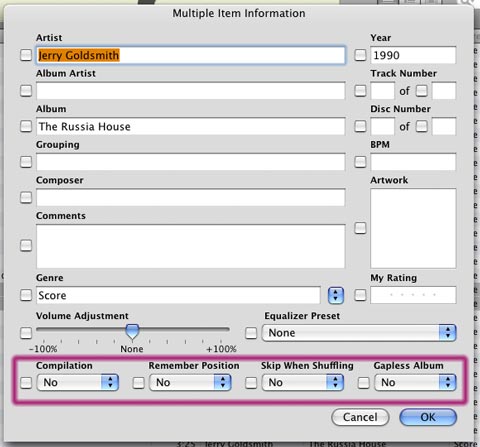 Hold down option (or alt) when opening iTunes to choose from multiple libraries. You can also create a new library from scratch and save it in a new location. iTunes will use this library as its default until another is selection using this same method.

Then there’s some new smart playlist criteria, including the afore-mentioned album artist, as well as the brand new last skipped and skip count.

Also, iTunes now lists all the problems it has syncing files with an iPod. 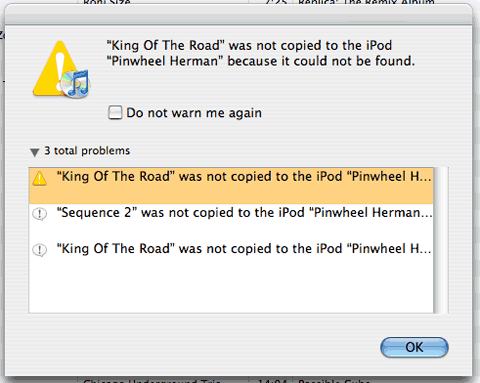 In a former life, I got paid to write about music. Listening to Basement Jaxx’s Rooty today reminded me of that past career because I remember it being on near-constant rotation during that time. I even wrote a lengthy, mostly positive, review of it, which I’ve dug up for your pleasure. Notice the references to those quaint devices known as "CD players."

Basement Jaxx was first brought to my attention roughly a year and a half ago, almost simultaneously by two independent sources. The first was one of my best friends since middle school whose musical tastes are, for the most part, decent with the occasional doozy. The second was a Swedish hipster I knew from college who embodied the concept of musical elitism.

Both were shouting praises about the Jaxx’s debut CD, Remedy. I figured that if these two totally different people could agree on something, I might as well check it out. It turned out to be a good choice.

Basement Jaxx’s funky brand of house-pop quickly and repeatedly found its way into my CD player and it’s been smooth sailing since. This album was perfect. Then, like an only child suddenly informed that they will have a younger sibling, this second full length disc came and threatened to destroy my perfect relationship.

My relationship with two of electronica’s benchmark acts had already been tainted twice this year by interesting, though somewhat disappointing follow-ups from Air and Daft Punk.

Astoundingly, the answers are no, and yes. While not surpassing the genius at work on Remedy Basement Jaxx’s Rooty continues to proclaim those melodic, brainy beats that I fell in love with the first time.

With Latin rhythms, house beats, pop melodies, hip-hop aesthetics, and the vocals of funk, Rooty delivers dance music for people who enjoy more than booty-shakin’, though if that’s your sole ambition, this album will suit you just fine.

In fact, I can count on two hands the number of people who did just that while I sat on the couch writing this review.

But for those who are interested, this album offers much more than bootylicous beats. True to Jaxx form, UK producers Simon Ratcliffe and Felix Buxton (with Corrina Josephs as a nominal vocalist) bring together exotic arrangements with fluid style.

SFM (Sexy Feline Machine) takes a page from Missy Elliot, Danny Elfman, and Prince’s handbooks, while "Broken Dreams" is a baroque-chamber-house conglomeration that somehow, amazingly, forms a samba, with a single latin horn conveying a dusty somber feeling as the beats go on.

I Want You sounds as though it were the soundtrack to a hidden level of Super Nintendo’s F-Zero, but more expressive and emotional. Where’s Your Head At pulses with raw punk energy.

If you listen closely enough, there might be a distant echo of The Police in the album’s closer, All I Know.

While Remedy remains Basement Jaxx’s landmark album, Rooty makes a strong and necessary addition to their, and your, musical library. It’s the younger sibling that brings out the best in older one.

returned from florida today. a couple highlights: air’s moon safari. that record gets better everytime i listen to it, like a fine wine that improves with age, or how the fox theatre seems to keep getting cooler just by continuing to exist. every song on that album is a masterpiece.

then there was kish kash, the most recent (2003) basement jaxx album (hey isn’t it time for a new one?). when i first got this one, it took me a while to really get into it and i continue to think that it is drastically uneven in its quality, but, ‘good luck,’  ‘right here’s the spot’ and ‘plug it in’ are among the best tracks in the duo’s catalog. ‘plug it in’ manages to succeed in spite of the n*sync connection.

in tunequest news, i figured out how to use excel’s linear regression tools to calculate more precise trendlines. 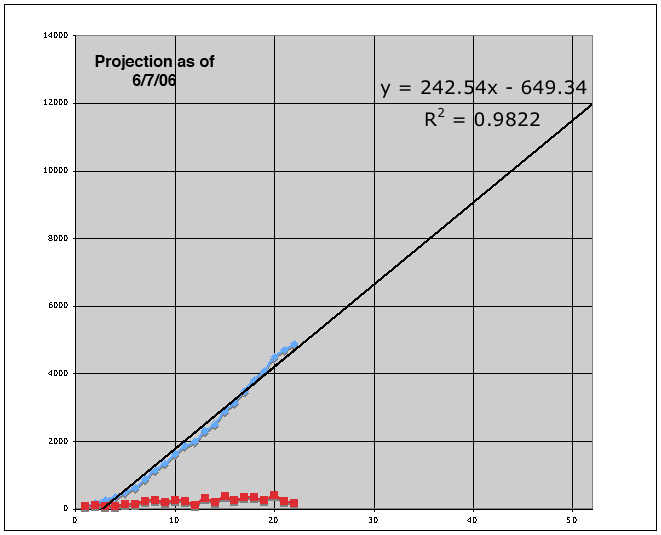 as you can see, the results aren’t pretty. this newly-accurate line predicts that i’ll have listened to 12,000 songs by the end of the year, about 2000 short of my goal. and, at the rate i’m going, i’m not weeding enough from my library; i’ll still be 500-1000 short. i guess all i can really do is re-double (quadruple?) my efforts again.