I’ve spent the past couple days playing around with Alex King’s iTunes Stats program. It’s written in PHP/MYSQL and requires a web server to run. With the MAMP one-click server running on my PowerBook, I had little trouble installing the program (though I did have to substantially increase the PHP timeout setting so it could handle my large library).

The program also comes with a number of built-in reports, such as Most Played Albums, Most Played Artists. Top Rated Albums/Artists and the option to weight by number of rated songs and play counts. The engine supports adding custom reports, so if you are motivated enough, you can create new methods of analyzing your music.

My PHPMYSQL-fu is not very strong virtually non-existent. Still, I was able to cobble together my own metric: Artist Impact.

An Artist’s Impact is measured by the total number of play counts they have received divided by the number of songs that artist has in the library. For example, Artist A has 20 songs in the library and those 20 songs have been played a total of 100 times. Thus, 100/20 = 5. That’s Artist A’s Impact. Basically, it tells you, the avergage number of times a song by that artist has been played.

This formula is a way to compensate for the bias present when some artists have significantly more tracks than others. In my case, I have 329 songs by film composer Jerry Goldsmith. He has an inherent advantage over say, The Breeders, who have 63 songs in my library. By virtue of being so prolific, Jerry is naturally going to have more play counts.

After playing around with it a bit, I’ve made some interesting observations. Firstly, the top 21 most impactful artists in my library, with one exception, have only one or two songs. In cases where an artist has a low number of songs, each play count is “worth more” in relation to other artists. A single play by an artist with only one song nets that artist a full “point,” whereas as single play by an artist with 20 songs would only gain .05 points.

Fortunately, I’m able to set a threshold for display, keeping outliers from being counted. Here’s my top ten High Impact Artists. The artist must have at least five songs in my library. Additionally, this list only takes into account “popular music” (excludes classical, live shows and film/tv scores).

I’m very surprised to see Jet in the number one spot. That’s because my affinity for the band has waned to virtually nil. Still, it’s hard to argue with the dent Are You Gonna Be My Girl? made in my listening habits back in ’03. The ironic part is that overall, I didn’t care for Get Born, so I ended up deleting five of the thirteen songs on the album. Those weaker songs aren’t there to dilute Jet’s Impact by lowering the ratio of play counts to songs, so the band’s number seems artificially inflated.

Overall, I’m having quite the enjoyable time playing with iTunes Stats, even though it’s a little rough around the edges. I’m working on a couple of new reports and have even figured out how to get it to tell me which albums are missing ratings and how many ratings need to be completed. 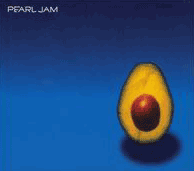 so all the pearl jam i’ve been listening to lately is leading to a kind of renaissance for the group as far as i’m concerned.

my fandom was huge in high school, basically through the release of no code. i was involved with some tape trading over the internet and regularly participated on an early mailing list dedicated to the band (which i had to telnet to tallahassee freenet in order to receive). i was a member of the ten club for a couple years and soaked up as much information about the band as i could get my hands on, keeping track of such minutia as who the current drummer was. i even managed to go to a concert once.

but as time went on, life found ways of distracting me. i kept up with the band less and less. no code didn’t capture my attention for very long and didn’t get much play. and while i’ve come to consider yield to be their best album (well-written, expertly executed and compellingly packaged), at the time of its release, i was well into diversifying my musical interests and there was much competition for my considerations.

after that, it was sheer momentum. i picked up a couple of the official bootlegs but barely listened to them. binaural and riot act barely made a blip on my radar, each receiving only cursory listens.

in retrospect, that’s most unfortunate. how i could have gone all these years without fully appreciating ‘god’s dice,’ i’m sure is a musical tragedy on my part. but if there’s one thing the tunequest is teaching me, it’s that this personal "second age of pearl jam" (defined as everything since 2000) is awesome.

my renewed interest inspired me to pick up the band’s latest, their eponymous albumpearl jam. i added it to my iTunes library last night, and "surprisingly," my ipod *randomly* chose to play it this afternoon, which i think settles the notion that it has its own favorites. (quick aside: my previous ipod committed suicide rather than play one more song by jet and all these years later, i don’t begrudge it one bit.)

anyway, this thing rocks! no gimmicks. no fluff. just straight-ahead sound. ‘world wide suicide’ earned a 5-star rating by the end of the first minute. and once more, here’s yet another record that i can’t wait to hear again. after the tunequest has finished. 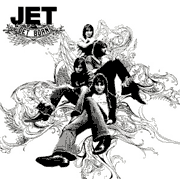 I listened to jet's get born this morning (well, selections from it). And despite the fact that i know they're just a crappy band with one good song not a great song, mind you, I haven't yet brought myself to get rid of the album. parts of it are long gone, particularly the awful beatles-imitation ballads.

on that, i envision a scene like this unfolding in the recording studio: dons an australian accent

boys, i've been listening to the record and, it sounds good, but we simply rock way too much. we need to up our wuss-factor with some slow tempo pianos and crappier lyrics that usual. you in?

cheap shot, i know. but i can't escape the feeling that the group is a bunch of ponces. which is why i'm slightly embarassed to still have retained 7 songs from the album. don't hold it against me, ok?

besides, 'are you gonna be my girl?' still kinda rocks, just not in a 5 star way.