For nearly as long as there’s been an Internet, fans have been contributing to the nine inch nails experience. There’s something about the music that seems to inspire a devotional following (probably has to do with expressions of angst, contempt and alienation wrapped appealing pop sensibilities). Youthful rebelliousness and antiestablishmentism runs deep through both camps.

Indeed, the rise of nin and the net seems to have coincided perfectly with each other. There were discussions on Usenet about Pretty Hate Machine being one of the best albums of the year in 1989 and the earliest mention of a nine inch nails web site that I could find is dated Nov 1, 1994, shortly after the net was opened to the public.

1994, of course, was the year the The Downward Spiral took the world by storm, reaching #2 on the Billboard Charts and exposing nin to the mainstream. Long story short: Reznor took five years to release another album and while lost in the wilderness, the steadfast fanbase incubated around the Internet. Fansites came and went, trading bootlegs and rumors and tracking the handful of singles and soundtrack songs released in the interim.

By the time 1999’s The Fragile release cycle began, Internet culture had matured quiet a bit. MP3’s and broadband were just starting to be mentioned in mainstream, but the leading-edge nails fans had already adopted them. I downloaded my first fan remixes sometime in the 99-00 winter and some of them were really good (like The Day The World Went Away (peppy by ignorantLOSER). download it). On the official front, Trent made several remixes and exclusive tracks available at the nine inch nails website. There was even a remix contest held for the song The Big Come Down (the winner can be found here).

Fast forward another five years. The Internet and computer technology had advanced quite a bit further. The album With Teeth was released in the spring of 2005 and a month later, Trent posted the source files to the first single The Hand That Feeds to his website in Apple’s Garageband format, officially sanctioning home-brewed remixes of the song. Websites sprang up immediately to catalog and share the fan-created materials.

Which brings me to today. One of the predominant trends on the Internet is, to be sure, social networking and inter-site integration (some call it “web 2.0”). What happens when you mix web 2.0 with the nine inch nails online ethos?

Taking the home remix concept a step further, Trent Reznor has put together a site where anyone can sign up, listen to, vote on, make comments about and download nine inch nails remixes, both official (as in previously-released on CD) and fan made. It’s freakin huge. The more industrious fans can download master tracks and make their own remixes for community evaluation and sharing.

The site combines the nine inch nails community and do-it-yourself artistry with a heavy dose of modern social media technology. The entire site is built in Flash and follows the graphic spirit typical of a nine inch nails presentation. Music can be selected from a playlist showing the latest top rated songs or you can search or browse for a particular piece. When browsing, you can create your own custom playlists. I started to put together a complete instrumental version of Year Zero before I realized that Trent had already done it for me. Other available playlists include Top Rated Fan Mixes, Most Commented, Newest, and Most Listened to, among others. 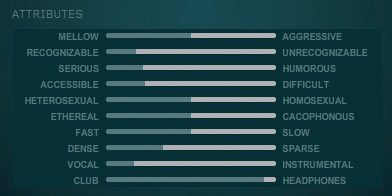 Once a song is selected, it begins playing in the browser and the song’s curriculum vitae is displayed along with it. If you enjoy what you hear, there’s a “download mp3” button next to the rating number. Users can also assign attributes to songs based on various continua such mellow vs aggressive or dense vs sparse.

Playlists as well as individual remixes can be shared. Playlists via RSS feed so you can publish your favorite tracks or keep tails on a favorite remixer. Individual songs can be shared via URL. Here is a decent remix of The Beginning of the End. The only thing that’s missing is embedable player, a la YouTube, for putting the mixes on your own site.

There is one thing I can’t help but grumble about (but good-naturedly): all those rare and unreleased songs for the downloadin’. Being the nails fan that I am, I’ve spent more a decade keeping up with all the loose-ended ephemera of the catalog. Imports, promos, versions, bootlegs and anything else rare and obscure. After all the work and effort, to my (light-hearted) chagrin, I come to find that a lot of it is now free for the taking. It took me six and a half years to find a copy of the Aphrodite remix of The Perfect Drug, but you can have it just by clicking on this link.

But hey, the fact that it’s available at all is pretty freakin cool.

No, no, I would never be so gauche as to advocate illicit file transfers though, who am I to condemn you for it. But you see that light blue Feedburner badge in the sidebar? I’d like to see the number on it start increasing.

So here’s the deal: sign up for the Tunequest RSS feed, and on a regular basis, I’ll point out a link to downloadable mp3s of worth in the feed entries. It could be a new indie rock song, or an old forgotten gem, a live show or a crazy cover version; anything that’s interesting enough to share. The internet is teeming with excellent free music, so I’m certain that everyone wins.