Not all audiobooks, mind you, just homemade ones; downloads from the iTunes Store and Audible seem to work fine. The story goes like this…

My carpool ended a couple weeks ago, as my riding buddy resigned to take another job. I’m going to miss the amity, conversation and, of course, the gas and mileage savings, but my solo commute will now give me the opportunity to invest more time into audiobooks and other spoken audio, passing the dreadful Atlanta Interstates somewhat more productively. I’ve started with Foucault’s Pendulum by Umberto Eco. It’s a fascinating adventure story about literature, philosophy, old secrets and the legacy of the Knights Templar told with compelling intellectual prose.

I first read the book eleven years ago when I was in high school and it inspired my to write a paper on the Templars, which brought me into contact with a strange world of the paranoid and the occult. Since then, I’ve noticed in modern books and movies, how mythical versions of the Templars, like Atlantis, are often brought up as keepers of ancient secrets, power and wealth that even today’s advanced civilization can’t understand.

Plus, a good portion of the book takes place in Paris, where I happened to be at the time I was reading it. At one point, I finished a paragraph and decided to immediately visit the location that had been described. That was pretty cool. However, unbeknownst to me at the time, between the publishing of the book in 1988 and my visit in 1996, the actual Foucault’s Pendulum was moved from the Conservatoire National des Arts et Métiers to the Panthéon, so I never did get to see it.

That’s great and all, but what does it have to do with the iPod?

Well, having decided to re-read/listen to the book, I promptly stitched together the nineteen audio parts into a bookmarkable AAC (m4b), which iTunes and the iPod treat as an audiobook. I started listening to it on the ride to work, getting about 30 minutes into the story. Once at the office, I switched to music, then when the day was over, switched back to the book for the ride home.

As expected, the book picked up where it had left off, continuing the story. All was well for about a minute, then the book suddenly stopped, returning to the iPod’s main menu. When I restarted the book, it began playing from the beginning, having lost the bookmark. Annoying to say the least. I noticed the next I synced up that the file’s play count had increased by one, as though the iPod thought it had played to the end.

This was not the first time this had happened; I had previously encountered this problem with a bookmarkable AAC audiobook of Al Gore’s The Assault on Reason, but at the time, I chalked it up to an error in the file. But this second occurrence indicated that something else might have been afoot. The behavior occurs anytime a homemade M4B file is interrupted, whether by playing another song/podcast/audiobook/video, syncing the iPod with iTunes, or if the iPod is asleep for long enough that it turns itself off and requires a reboot. The problem doesn’t occur if the audiobook is simply paused and restarted.

So I set about trying to find a solution to this irksome problem.

A quick trip to Google turned up a thread on the forums at Audiobook Builder’s website. Audiobook Builder stitches together many files to create (build), you guessed it, one long audiobook, which is great for books spread across multiple CDs. ABB happened to be the program I used to create my Pendulum M4B file, so it looked like a good place to start (though I’m not implying that Audiobook Builder was at fault; my Assault on Reason files were similarly deficient and those were stitched together with the Join Together AppleScript).

The direction of that discussion leaned toward the mix of the file, specifically if it were mono, was the culprit. Sure enough my files had been encoded as mono. (Quick aside: Files encoded in mono aren’t any smaller than a stereo counterpart at the same bitrate. However, you can use a lower bitrate and maintain the quality of the sound with mono). Thinking I had the case solved, I converted the files to stereo, synced up the iPod and continued with the story.

For about a minute.

The thing quit again. Clearly the channels were not the issue. Without any further leads, I set about trying to eliminate variables. I tried a higher bitrate. I tried a lower bitrate. I removed the album art/book cover. I took all the chapter markers out. I removed all ID3 tags until all that was left was a bare bones AAC file. Then, just when it looked like that might work, it failed again.

The last recourse was to segment the file into shorter pieces. Rather than one 24 hour file, I have ten 2-2.5 hour files. Yeah, that’s fewer than the nineteen files I started with, but it’s not as elegant as a single long one. But it works, so despite my frustration that the bug exists, I can finish my story without the constant scrubbing to a lost place mark.

Another workaround I thought of is to use join the pieces into one long MP3 file. Then, after adding it to the iTunes Library, get info on it, marvel at the incredible length of the file, and select “Remember Playback Position” in the Options panel. That will emulate the bookmarking feature, but you won’t be able to play it slower of faster like a bona fide M4B Audiobook.

Note: The behaviors described below are from Mac OS X 10.4.10. Previous versions of the OS might not behave as described. YMMV.

Keyboard shortcuts are the life-blood of the power user. Casual users know of the basic ones: Command-Q to quit, Command-W to close a window, Command-F to find, etc, but the power users have them all memorized for every program they use. For them, actions that would take 3-5 seconds of arduous mouse work can be accomplished in as little as half a second of keyboarding. That’s up to a 10x increase in productivity! Heck, many individuals, myself included, can go for minutes without even touching the mouse.

But even the most vaunted power user might not know this trick.

Mac OS X (both Panther and Tiger) has a little-promoted feature that lets you customize some of those keyboard shortcuts for menu items. Even some global commands can be changed to suit your tastes. Don’t like Command-P to Print? Change it. You can even make it an F-Key and return some functionality to your keyboard’s top row. In some cases, you can give shortcuts to menu items that don’t have one.

There are some caveats however:

So, having said all that, let’s apply it to iTunes.

The Macintosh version of iTunes, as you may well know, can extend its capabilities via AppleScripts, those little bundles of code that help with repetitive tasks, make organizing easier and add new features. A new Scripts Menu will appear in the Menu Bar when AppleScripts are installed 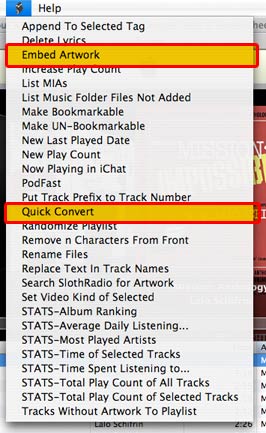 Start by opening iTunes. Click on the Scripts Menu and determine which scripts you want to add shortcuts to. Note their names as they appear in the drop-down. For this example, I’m selecting a Script called Embed Artwork. It copies album art downloaded from the iTunes Store into the individual music files; iTunes doesn’t do that by default, so I end up using it pretty frequently. I’ll also do Quick Convert, since I often use it to convert podcasts into audiobooks for faster listening. 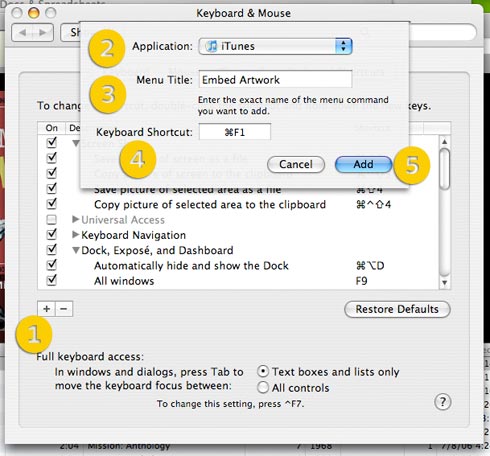 Open System Preferences. Select Keyboard & Mouse, then Keyboard Shortcuts. Click the + (plus) sign in the lower left, then select iTunes from the Applications pop-up. In the Menu Title field, enter the name of the script. In the Keyboard Shortcut field, press the key combo you wish to use. For Embed Artwork, I’m choosing Command-F1, Quick Convert gets Command-F2. A modifier key is required in iTunes. Stand-alone F-Keys, for whatever reason, will show up in the menu but they won’t do anything when pressed. When you’re satisfied, press Add to save. 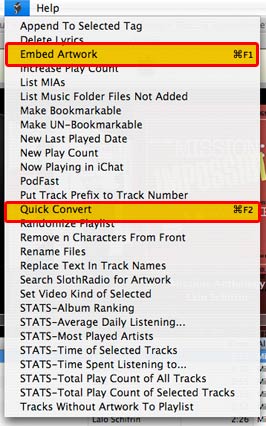 iTunes loads the keyboard shortcuts when it is launched, so quit and reopen it. When you click the Scripts Menu, you’ll see your new shortcuts displayed next to your script titles.

It is important to remember that configuring keyboard shortcuts, in general, is an inexact process. If something doesn’t work, find an alternative. I know I would love to use those F-Keys in iTunes. but for now, I’ll have to settle for the workaround. Still, these added functions will be a boon to anyone’s productivity.

iTunes 7’s built-in artwork finder is a great little enhancement to the program. But it does have it’s limitations. It seems to require exacting ID3 tags or it won’t return a requested cover. And if a particular song/album isn’t sold by the iTunes Music Store, well, you can just forget it. Likewise if you’re not running iTunes 7.

SlothRadio.com is a streaming radio site and music blog who’s self-described mission to “just play great music.” I can’t vouch for that claim, but, in addition to that, the site does offer a nice cover finder. You can find high-quality art for music, movies, games and books just by typing into the search fields.

Results default from Amazon’s extensive catalog, but if that doesn’t turn up any results, you can do a Google Image Search with only one additional click.

The beautiful part, for Mac OS X users at least, comes in the form of an AppleScript from dougscripts.com called, appropriately, Search SlothRadio for Artwork. Drop that sucker into your Library > iTunes > Scripts folder and whenever you need to search for an album cover, just select the songs in your iTunes Library then run the script from the Scripts menu.

Voila: Instant artwork to drag & drop, copy & paste or do whatever you want to with it.

There’s a slight bug though. The script uses Safari to perform the query. It will give you an error if there’s not already a browser window open. But other than that, it presents a nearly flawless way to retrieve album covers.

Anyone who has been reading the tunequest for a while knows that statistics, numbers, figures and graphs have played a large part in its progress. In fact, it was the discovery that 10% of my songs were responsible for 49% of my total play counts that prompted me to set out on this endeavor in the first place.

To this day, I’m still surprised by the lack of sophisticated options available for gathering and analyzing iTunes’ stored data. That XML file has been a statistical treasure trove since the day it started recording star ratings and play counts. You’d think that in the four years since, there would be a more mature market of programs to choose from.

However, 2006 has actually seen some positive developments in that regard. While there is still no killer app for iTunes stats, there are a number of solutions for parsing your XML file and learning more about your music, and yourself.