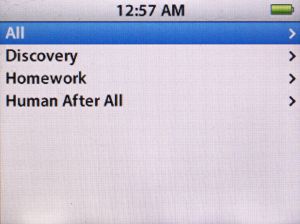 Not that long ago, I was asked by a commenter if I had any suggestions for getting the iPod to sort albums chronologically. By default, the iPod’s behavior is to sort albums alphabetically by title. In iTunes, there’s the option to sort “Album By Year” but the iPod features no such function.

At the time, I didn’t have much of an answer for him other than to put the albums in a playlist and just listen to the songs in chronological order. But in an interesting twist, the pixels in that reply were barely dry before Apple released version 1.3 of the firmware for 5G iPods. After some further discussion, this trick was discovered:

The most noticeable change in firmware 1.3 is the application of iTunes’ “smart sorting” (ignoring “a” “an” and “the”), including recognition of iTunes’ custom “Sort Fields” (Sort Album, Sort Composer), for Album and Composer. The Sort fields allow you to enter any text that you want and iTunes/iPod will use that to order the list of items, while displaying the text from the actual field.

Using the Sort Album field, you can easily put albums in whatever order you like. For example, you could put the Halo number of Nine Inch Nails releases in the Sort Album field to have all items, including singles and remix albums, displayed in the order they were released.

UPDATE: The previous version of this post recommended putting the year of the album in the Sort Album field. This, however, effectively changes the name of the album within iTunes’ logic, making it group all albums of the same year together.

The revised method is to simply prepend the year to the album name in the Sort Album field. This way, each album gets a unique identifier that still sorts by year.

Additional caveat: this tip has the potential (there have been mixed reports) to reorder the listings of the “Album” browser, as the Sort Album field may be applied to it. So if you ever use the iPod’s Album View, keep this in mind. See the discussion in the comments for effects and solutions.

As you can see in the image at top, the default behavior is to display the albums in alphabetical order, with Discovery as the first. How do we fix that? 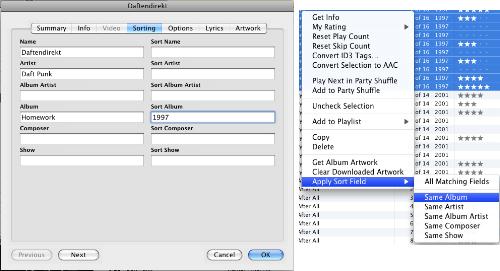 When you next update your iPod, the new data will take effect and the albums will be sorted by release date. 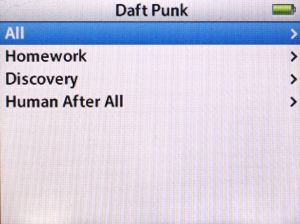 This process works for any 5G iPod that has been updated to firmware version 1.3 (and I assume iPods/iPhones released subsequently) So if you haven’t updated yours, hop to it and then get customizing.

UPDATE 2: As mentioned in the comments, if you have an artist who released two or more albums in the same year, there are two options you can use to sort them appropriately:

wow. a whirlwind of music the past couple days. i guess that’s what happens when impending deadlines force you to stay at the office into the wee hours of the evening. who says publishing isn’t a rewarding field?

some great music this time around:

while we’re on the subject of leaps-above-the-bar music, i must also mention both stereolab’s dots and loops and hum’s downward is heavenward. though i’ve been a stereolab fan for quite some time now (i’ve even been to 2 shows), i didn’t realize until i was preparing this write up how highly rated dots and loops is. stereolab is a great band, but it can be very uneven. on most albums, every 5 star song is countered by a 3 star song (the lowest on my ratings scale; 1 and 2 stars are reserved for organizational purposes), but not dots and loops. every song on that album is either 4 or 5 stars. ‘miss modular, ‘prisoner of mars’ and ‘parsec’ stick out as particularly outstanding works.

i remember my first stereolab reference. it was my senior year of high school and i was on a road trip with 2 friends and my mom, scouting colleges in central florida. we were walking around the campus of the florida institute of technology when my friend roy mentioned that he was getting into this new band stereolab (of course, the band had been together about 6 years at that point, but it was new to him). now, i never really trusted roy’s musical recommendations. our tastes overlapped for the most part, but not enough for me to heed his opinion. nothing really came of it, but i do remember seeing dots and loops laying about his room. it wasn’t until 2 years later when i heard cobra and phases that roy was vindicated in that regard. the rest, as they say, is history. •

a note about the babylon 5 music: i’ve gotten about 60% though my collection of it and i still can’t make head or tails of it. it all just sounds so… the same. the 30+ albums that make up the more than 17 hours of music is a lot to digest, particularly when it’s all a similar style. that’s not to say that it’s not good. each season’s theme is excellent of course, and some choice cues are great, such as the classical guitar work that i heard in the ragged edge today. but there’s a lot of more ambient ‘mood setting’ music that kinda blends together from album to album, which makes it hard to decide which tracks to take special note of.

then of course, there’s the coming of shadows, which also made the playlist today. the entire production team was firing on all cylinders for this episode, including christopher franke, who has written some very tense music for a very tense episode. if i had to recommend any of the babylon 5 albums, it would be this one. •

quickies:
some smooth slacker jazz from medeski, martin and wood.
the surf-inspired stylings of man or astroman?, including a rendition of the MST3K theme.
some competent electronic work from orbital. 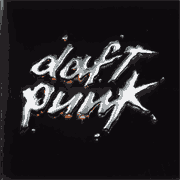 Dear god, a club-oriented album from daft punk. Either the punks were indulging some secret fantasies on this monstrosity or they were playing a big practical joke on everyone, ’cause I can’t believe they would have released Discovery with a straight face.