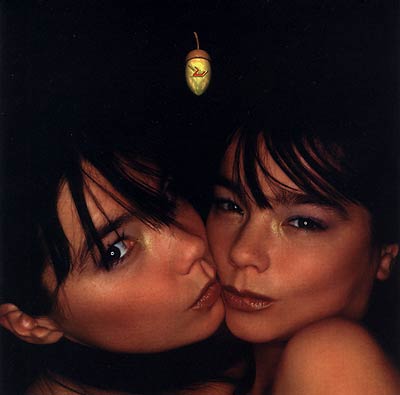 I’ve never been in love with Bjork’s music. To be sure, Bjork is a consummate artist and I do enjoy and have much respect for the majority of her work; I’ve just never been part of the “Bjork-is-untouchable” group. But if I were to become part of that club, it would be because of this song.

I Go Humble never fails to send me into a state of trance-like bliss.

There’s something in the earnest subjugation of her voice, the spacey electronic melodies and the disjointed-but-smooth percussion that just captivate me for its entire five minute length every time I listen to it. It has done that for the past ten years.

What I Love: Everything about it dammit.

I spent a portion of this Saturday going through my extended archive of music, the stuff that’s not in my central, everyday iTunes library. Most of those files are a bit old and for either quality or tagging reason, they’ve been left unincorporated. Some of these songs have been sitting untouched and unlistened to on cds and hard drives for years.

So I’ve decided to start sorting and evaluating them for re-inclusion into the main library, checking the ID3 tags, bitrates and such to make them conform to my standards.

And of course, I’m making sure I still actually like the song. In the case of this one particular song, Bjork and PJ Harvey covering the Rolling Stones’ Satisfaction (I Can’t Get No) at the 1995 Brit Awards, I was sure it would be gangbusters.

Turns out it was lacklusters. I didn’t much care for it. Somehow, they mangage to go over-the-top without doing anything at all.

So I’m deleting it from my collection. But not before I give it away. If eight-year-old mp3s are your thing, and the prospect of a Bjork/PJ Harvey duet makes you salivate in anticipation, download away.

Just so you know what you’re getting yourself into, there just happens to be a YouTube video of the performance:

In addition to their world-sized beats, The Chemical Brothers are generally known for their world class videos. I stumbled across this video to Star Guitar from the duo’s 2002 release Come With Us while perusing the ol’ Google Video/YouTube library this afternoon and was quickly fascinated.

It was directed by noted film dude Michel Gondry, who’s done some impressive work, including intriguing videos for Bjork, Beck, Radiohead and many other musicians, as well as numerous innovative television commercials. But he’s also responsible for pioneering “bullet time” cinematography, so negative points there.

Of course, the concept of synchronizing visuals with the rhythm of music isn’t exactly new, but the execution here is clever. Though by the end of minute three, you’ve pretty much gotten the point and are ready to move on.

Star Guitar is an awesome song and the video is pretty cool, so enjoy it:

So I was in the middle of putting together a little write up about a couple pieces of Star Trek music, when two notable events occurred here at tunequest. In progress news, I crossed the sub-1000 songs remaining threshold yesterday while listening to Joe Hisaishi’s score to Spirited Away. Hisaishi has composed music for nearly all of master Japanese director Hayao Miyazaki’s animated masterpieces. The beauty and grandeur of those films is matched, if not exceeded by, their music. Always melodious, mysterious, sweeping and haunting, it gives me chills.

Meanwhile, aside from that milestone, tunequest was apparently accepted into the 9rules blogging network, whose stated mission is to advocate and promote top-shelf content and talent. I’ve only recently become familiar with it and, honestly, submitted my entry on a purely “what-the-hell” basis. So to be accepted is a freakin’ huge compliment. To which I simply say, “Aw shucks.” 🙂 and I look forward to contributing.

The thing is, the actual tunequest was always going to be a time-limited endeavor. My goal was to listen to every song in my iTunes library before the end of the year. That’s it. It started as simply a personal journey to acquaint (and re-acquaint) myself with the myriad of tunes that I had collected, but had gone neglected since the advent of the iTunes+iPod paradigm.

Early on, I decided to chronicle this quest, choosing to tell myself and others what all this music means to me. I figured that by this time of the year it would be neat to look back at all I had done and be like, “Yeah, that was cool” and just share some of my thoughts and experiences.

When I started this, I literally had thousands of songs that I’d never played or hadn’t listened to in years. Part of the goal was to really evaluate the music in my possession. Going in, I knew that the ease of digital distribution had led to my acquiring music simply because it was possible. The problem was that the pack rat in me wouldn’t let me get rid of things, particularly the obscure and under-rated things. (I’m a sucker for an underdog).

And you know, under this evaluation, I discovered that most of my music was worth keeping. It turns out I had originally liked it for a reason. Sure, not everything aged well. My affinity for drum-n-bass has waned significantly and there were multiple film scores that I just never got into. Bjork’s Medulla, gone. Kid Koala, gone, as are a handful of “glitch/noise” records whose indie cred of being “difficult but rewarding” wasn’t enough to justify keeping them around. In total, only about 7% of my library has been cut.

But the real surprises came when an album or artist defied my expectations. More often than I would have guessed, the albums that I had pegged as potentials for deletion were actually quite compelling. I was frankly astonished that Franz Waxman’s 1935 score for Bride of Frankenstein perfectly blends my love of both film and classical music. Nobukazu Takemura’s Child’s View and For Tomorrow re-affirmed that the man is a genius. Heck, even The Offspring, who I continue to like against my better judgement, managed to con me into keeping Conspiracy of One around.

But that’s all past and this is supposed to be about the future.

Even though the original tunequest will be drawing to a close soon, music will be around for a long time. Hopefully, I’ll be around a long time to listen to it. I’m sure I’ll have opinions, thoughts and an intensive desire to share.

So, moving forward, I don’t expect much to change around here. Content will take a looser form I suspect, since it won’t be tied to the rigorous listening pattern of my library. And I’ll possibly branch out into other subjects from time to time. I am also toying with the idea of initiating “mini-tunequests,” that is, finding a particular niche of music and exploring it in detail, like all the James Bond scores or something similar.

Format-wise, I plan to continue posting insights and observations about the music in my life, the song of the day though probably not every day and tips and ideas for getting the most out of iTunes and iPods. I’m also hoping to resurrect my long-defunct “Records that time forgot” series.

But if this experience has taught me anything, it is that a tunequest is a life-long journey.

Oh, and feed subscribers will continue to get curated links to free music downloads.

Webomatica posts about his best and worst James Bond songs. It’s a nice list; I threw my picks into the comments, though I left out the iconic James Bond Theme. god bless John Barry for that. We disagree about Man With The Golden Gun, but to each his own.

But, really, I’d like to call some attention to another Bond-related project. Shortly before composer David Arnold took over the scoring responsibilities of the franchise, he produced a covers album featuring the famous intro songs performed by contemporary artists. In fact, this project contributed to his getting the assignment for Tomorrow Never Dies.

The disc was titled, oddly enough: Shaken and Stirred: The David Arnold James Bond Project and honestly, overall it’s not that good.

None of the performers involved (David McAlmont, Pulp, Shara Nelson, Martin Fry, others) manage to improve upon the original versions, which leads to the question, “What the heck was the point?”

Of course, there are a couple worthwhile tracks on the album. Aimee Mann does a pretty decent rendition of Carly Simon’s Nobody Does It Better and UK progressive house outfit Leftfield submits an intriguingly up-tempo remix of Barry’s Space March theme.

But the real surprise on the album comes from none other than Iggy Pop. I can’t quite put my finger on it, but his version of Louis Armstrong’s We Have All The Time In The World is sublime. Give it a listen:

Curiously, Bjork also recorded a song for the project (Nancy Sinatra’s You Only Live Twice), but withdrew it shortly before publication. Her version is fairly faithful to the original and basically sounds, well, like Bjork singing You Only Live Twice. It surfaced on the internet a few years ago; you can listen to it below or download an mp3 here.

I could probably be accused of not "getting it," but i’m really disappointed with Bjork’s Medulla. that’s not a pun. In the past, I’ve been appreciative of her ability to push boundaries and experiment while making those experiments listenable and appealing, but after multiple false starts, I just can’t get into this album. Though, it doesn’t lessen my respect for her as an artist, I will have to say that it’s likely that this album will be leaving my collection.

Hopefully, her next album will be more palatable to my tastes.