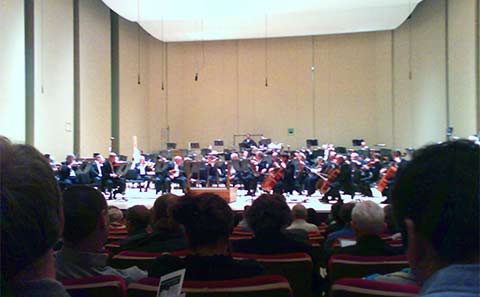 Quite the musical week here at tunequest. A little more than usual.

First the Ratatat show, now a symphony performance. The Atlanta Symphony put in a wonderful performance of Holst’s Planets. From the raw power of Mars to the ethereal ambiance of Nepture, the orchestra dispatched all seven symphonic poems with passion and exuberance. "Wow", I say "Wow."

Parts of Mercury felt a little bit off, but it could have just been the acoustic of the hall (which honestly aren’t that good; let’s hope the new hall gets built soon). It didn’t matter though; by the end of Mars, I was willing to forgive just about any mis-step. The full force of the orchestra performing only a few feet away literally gave me chills. Man, it was good.

I’m stoked for this ASO season. 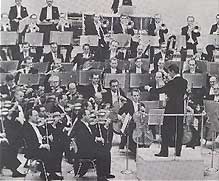 It’s official: Tchaikovsky’s No 5 is now my favorite symphonies of his. It had been running neck and neck with No 6 for a very long time, but a recent Berlin Philharmonic listening has pushed it to the head of the pack.

In addition to those melodies that you just can’t get out of your head, there’s this one passage about 8.5 minutes into the fourth movement were the structure of the piece begins to crumble. But before the piece descends into chasom the timpani roars to life and the woodwinds come flying to the rescue.

END_OF_DOCUMENT_TOKEN_TO_BE_REPLACED

At times, i really resent owning a car. Yeah they’re convenient necessary for getting around, but with the fueling and maintenance and cleaning and well, effort that goes into having one, there are times when I’d just as soon not have one. (Oh, for a more vibrant public transportation system in metro Atlanta.)

Don’t get me wrong. I’ve got a ’99 saturn sc2 (aka "the cherry bomb"–it’s red) and I love it; I’ll probably hang on to it until the day it stops working. To that end, I try to treat it right. Thanks to car-pooling, it’s taken me five and a half months to put not-quite-3000 miles on my vehicle, so it was definitely time for an oil change and quarterly car wash.

Normally, when there’s music to be heard wafting through the neighborhood’s air, it’s some kind of bass-thumping or mexican oompah. On a couple occasions there’s even been some adult contemporary. But today was my turn to be the obnoxious boombox on the block.

And I’m sure the stuff I was playing is not the kind of stuff it’s used to hearing. To start things, I cranked Can’s Ege Bamyasi. This is one of the records that changed my perspective on music and I discovered it in a roundabout way.

For a number of years in the late 90s I maintained a website devoted to helping me keep track of all the various b-sides, covers, and unreleased ecetera from my favorite artists at the time. When you’re a collector, those types of things are important and I figured that others could benefit from my work as well as offer me updates.

One of the more challenging artists in the project was Beck, whose catalog was, even then, extensive and diverse, parts of which are pretty obscure. At one point, I read that he had covered a song called I’m So Green by a group called Can. I hadn’t heard of it and couldn’t locate a copy of it, so I just filed it away on the list and carried on. to this day, I’ve only been able to track down a 1-minute excerpt from it.

Cut to a couple years later, when in the summer of 2000, I was researching my-new-and-to-this-day-favorite-band Mouse on Mars, who cited Can as one of their musical influences. Inspired by this coincidence, I found a copy of I’m So Green and the album it appears on. I was instantly hooked and Ege Bamyasi quickly became one of my top albums (Six of its seven tracks are rated 5 stars).

That thing that amazed me though and changed my musical perspective was that the record was released in 1972, a number of years before I was born. While I considered a lot of music from before my lifetime to be "respectable" I had never really accepted that it could be good. This album convinced me otherwise and the timespan represented in my library has extended much.

On to the oil change. This was my first unassisted oil change in quite sometime, so I had to re-teach myself how to do it. The theory is simple enough; the practice… well that takes practice. It took a little bit longer than expected, but I got to serenade the neighbors with Mahler’s Symphony No 6 "Tragic" performed by the Chicago Symphony Orchestra while I figured it out.

To say that I like this symphony would be a dramatic understatement. I own nine different recordings of it (the Philharmonia’s is my favored and the Berlin Philharmonic’s is exceptional, as is this CSO performance under Abbado). At nearly 90 minutes in length, it is a symphony that takes dedication and perseverance to get through, but it is an edge-of-the-seat roller-coaster of raw power and emotion that sucks you in from the first measure and never lets go.

Experimental rock band Can was always several steps ahead of its contemporary music scene, exploring frontiers of rock music that wouldn’t become popular for another 10 to 20 years. Formed in Cologne, Germany, in 1968, Can (bassist Holger Czukay, keyboardist Irmin Schmidt, guitarist Michael Karoli, and drummer Jaki Liebzeit) was dedicated to tinkering with song construction methods and unorthodox arrangements, often incorporating noise, analog synthesizers, and experimental recording techniques. By the early 70s, Can had emerged into an experimental music community that included such pioneers as Neu!, Faust and Tangerine Dream.

Though rooted in the German rock scene, Can gravitated more toward minimalism (and even ambience), abstaining from the industrial bent that marked many of the group’s contemporaries, most notably Kraftwerk, preferring a musical formula that was closer to, but still divergent from, traditional rock. Despite its relative obscurity in America, Can has been cited by a wide range of artists as an influence, including Sonic Youth, Stereolab, Tortoise, and Mouse On Mars, as well as mainstream rockers Beck and Radiohead and scores of electronic musicians.

Recorded at the height of the “Suzuki Era” (so-named for then-singer Damo Suzuki, an expatriated Japanese street poet, who betrays not a hint of ethnicity), “Ege Bamyasi” shows Can at its most avant-conventional, delivering an amazing set that still holds its own against many of today’s more technologically sophisticated artists.

The pneumatic “Pinch” opens the record, trading slide whistle expressions with Suzuki’s ambiguous vocalizing over what amounts to a free jazz-inspired funky nine-minute rhythm section solo. Pinch fades into “Sing Swan Song,” a melancholic pseudo-waltz that effortlessly floats from the speaker. “One More Night” resumes the pace, driven by a simple, but mesmerizing head-bobbing groove, while Suzuki ponders the delusions of being alive for “one more Saturday night.”

Time feels as though it’s running out on “Vitamin C” as Leibzeit’s militaristic drums combine with a spring-wound tick-tock bass to deliver Suzuki’s ominous message: “You’re losing your Vitamin C; You’re losing your mind.” Czukay’s muted bass takes center stage on “Soup,” contributing to one of Can’s trademark rhythm explorations, before dissolving into sporadic and independent expressions of noise from each of the band members. Contrasting the proceeding cacophony, “I’m So Green” provides Ege Bamyasi with its most accessible song. Powered by an infectious proto-techno beat, it is easily the highlight of the record. Closing the album is “Spoon,” an other-worldly bossa-nova that seemlessly marries psychedelia with exotic composition.

Despite the passage of nearly 30 years, Ege Bamyasi is as fresh a record as it was when it was released and remains a great starting point for those curious about Can or experimental German rock in general, as it is as listenable as it is groundbreaking.

at 5:19 pm eastern, i officially crossed into 4 digit territory. i now have less than 10,000 songs to go before i complete the tunequest. that is of course if i don't add a lot of new songs to my library…

for those who are interested, the lucky song was the first movement from dvorak's symphony no 1 performed by the royal scottish national orchestra. good piece, that is.

Today’s I-285 adventure was sponsored by Philip Glass’ 1996 "Heroes" Symphony (or Glass’ Symphony No 4), a fantastic orchestral suite in 6 parts that’s based on but not an orchestral transcription of the Bowie/Eno album of the same name.

Unlike some of glass compositions, which can be inaccessable at times, this symphony is very compelling. Yeah, it’s full of his trademark cyclicality, but because it is rooted in a more popular form of music, this record really draws you in.

I’m particularly enthralled by the tension in Abdulmajid.

i heard tchaikovsky's 5th sympony on the way into work this morning and i can't stop humming it. this particular recording is by the leningrad philharmonic and was recorded in 1960. the 5th symphony has a number of very catchy themes that quickly burrow into your head and just get stuck there. every time i hear this symphony, i love it more. it has even eclipsed my appreciation of his 6th symphony, though i don't think it'll ever surpass his slavonic march.