In my last post, I detailed the ten albums that earned the highest ratings from me during 2007. But while I did find them each to be fantastic recordings, ratings don’t necessarily reflect popularity. That is to say that the most highly rated albums might not have been the most often played.

Indeed that’s not the case. I took data from the past year and ran it through my Impact report, which measures the relationship between total play counts and the number of songs an album or artist has in my library in order to see who has received the most attention relative to their size

While the results show some significant overlap with the top rated list (of course I listen to what I like), it turns out that being highly rated doesn’t necessarily guarantee a lot of playing. So without further ado, here are the albums that made the biggest splash last year.

Showing Trent Reznor at his best, Year Zero received significant airplay throughout the year, enough to earn it the title of “Tunequest’s Most Impactful Album of 2007.”

I listened to Pocket Symphony in a huge burst after its March release and kinda petered out over the remainder of the year. Still, that initial burst was enough to coast to a second place ranking.

3 Rilo Kiley – Under the Blacklight

Rilo Kiley is one of a handful of musical acts that both the modernista and I actively like. It should be no surprise then that despite its late summer release, Under the Blacklight was in heavy rotation for the duration of autumn, so much so that it claimed the number three spot.

The Ambassador’s debut disc broke into my brain early last year and left a substantial wake in its path. Our intergalactic diplomat’s electrogrooves are really really catchy. In my library for nearly the entire year, Diplomatic Immunity garnered the most play counts of any album I acquired in 2007.

Radiohead’s revolutionary distribution may have brought the record to my ears, but its quality kept it playing again and again. Though In Rainbows narrowly missed my Top Rated Albums of 2007, it was listened to enough to become the fifth highest impactful album of the year, quite a feat considering the early October release of disc one and the early December release of disc two.

Also of note, here we see a huge drop in impact ratings between places 4 and 5. It’s clear that the top four were the breakaway albums of the year. Those four albums were responsible for 20% of the impact points generated among new aquisitions last year. Which means that either those albums are fantastically good (and they are) or I need to diversify my habits a bit (which I probably do). But hey the ears like what they like. 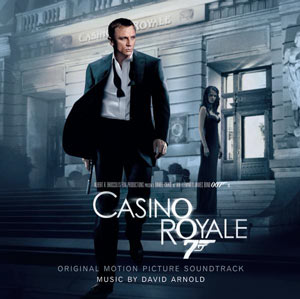 I’ve been checking in on David Arnold’s film works every so often since the late 90s, when I discovered his score for the original Stargate film. Since then his scores have continued to impress me, especially his work for the James Bond franchise. His composition for Casino Royale, the 2006 re-booting of the Bond character, is perhaps his finest contribution yet. Lush, inviting and full of suspense and action, Casino Royale projects the best of the Bond musical heritage with a suave confidence that’s the hallmark of the character. But it adds its own unique motifs and ambience, keeping it from sounding like a re-hash of John Barry’s seminal soundtracks.

A highlight of the record is I’m The Money, a short 27-second track. But those 27 seconds are filled with the distlled essense of the entire score and they evoke the predominate atmosphere of the film as well, from the exotic and intriguing to the dark and dangerous.

The more I listen to this one, the more I might think it’s the best score of Arnold’s carreer and perhaps the best in the entire James Bond series.

Rounding out the Top Ten Impactful albums of 2007

All the remaining records also appear on my Top Rated 07 list.

For those would would like a baseline, the average impact for all records acquired in 2007 was 68, while the median was 16. Additional math shows me that the top 20 records were responsible for just more than half the impact ratings generated throughout the year. So I’ve resolved this year to show some more consideration with my musical choices. Last year’s massive influx of new tunes was largely a response to having neglected many new records and trends in music while partaking in the original tunequest. This year I’ve decided to purposefully not seek out too many new records and spend more time with the ones I do get.

Released in 2002, John Powell’s music for The Bourne Identity is a smooth contemporary action score that is an exception to the typical generic compositions that accompany such films. It draws upon the standard spy-thriller ethos and echos the work of David Arnold for the James Bond franchise, particularly with its use of lush strings, blending of electronic percussion and sprinkling of jazz and rock elements.

Which is to say I like it a lot. I just saw the film for the first time a week ago good stuff, but I’ve been enjoying this score for years now.

It features pensive action cues that roar to life when needed, but avoids becoming the bombastic cliches that are prevalent in many modern action movies. At the heart of the score, however, are the somber, contemplative, even forlorn moods of a man searching for himself and his place in the world.

With those ideas juxtaposed, the album works on pretty much every level.

Highlighting the score is Treadstone Assassins, a cue used to accent the resolve of CIA’s experimental squad of hit men. It feels more like a dirty rock groove than an orchestral underscore but it doesn’t deviate from the heart of the album. Powered by a gritty determination, this track thumps out an engaging, focused rhythm that screams “let’s do this.”

Do yourself a favor and grab this album.

Webomatica posts about his best and worst James Bond songs. It’s a nice list; I threw my picks into the comments, though I left out the iconic James Bond Theme. god bless John Barry for that. We disagree about Man With The Golden Gun, but to each his own.

But, really, I’d like to call some attention to another Bond-related project. Shortly before composer David Arnold took over the scoring responsibilities of the franchise, he produced a covers album featuring the famous intro songs performed by contemporary artists. In fact, this project contributed to his getting the assignment for Tomorrow Never Dies.

The disc was titled, oddly enough: Shaken and Stirred: The David Arnold James Bond Project and honestly, overall it’s not that good.

None of the performers involved (David McAlmont, Pulp, Shara Nelson, Martin Fry, others) manage to improve upon the original versions, which leads to the question, “What the heck was the point?”

Of course, there are a couple worthwhile tracks on the album. Aimee Mann does a pretty decent rendition of Carly Simon’s Nobody Does It Better and UK progressive house outfit Leftfield submits an intriguingly up-tempo remix of Barry’s Space March theme.

But the real surprise on the album comes from none other than Iggy Pop. I can’t quite put my finger on it, but his version of Louis Armstrong’s We Have All The Time In The World is sublime. Give it a listen:

Curiously, Bjork also recorded a song for the project (Nancy Sinatra’s You Only Live Twice), but withdrew it shortly before publication. Her version is fairly faithful to the original and basically sounds, well, like Bjork singing You Only Live Twice. It surfaced on the internet a few years ago; you can listen to it below or download an mp3 here.

This past week I listened to two soundtracks that were spin offs from successful motion pictures. However, neither one was for a motion picture sequel.

The first was Joel Goldsmith’s score to the pilot episode of Stargate SG-1, the long-running TV show. Joel, of course, is the son of legendary composer Jerry Goldsmith, and is a composer in his own right.

I have to give him credit for this score. While it’s not terribly inventive, it does an excellent job of continuing David Arnold’s themes and motifs from the original film. Rather than re-invent the wheel, the SG-1 score is a nearly seamless transition to the small screen which keeps the Stargate universe cohesive. The re-use of the original cues also gives the score a much larger sound than is typically found on television program, where budgets for music are limited.

SG-1 assumes that the viewer knows the premise of the show. Thus, the show spends less time than the film did unraveling a mystery and concentrates more on action and spectacle. The TV score reflects that, providing 50 minutes of compelling music.